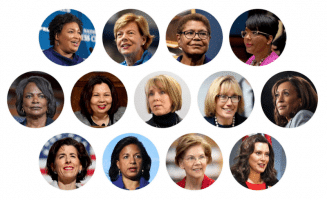 As the speculation intensified—”Who will Joe Biden choose as his running mate?”—so did the endless sexist blather.

Whoever your favorite is, or if your own pick is None of the Above, you’ve no doubt heard the critiques from all quarters.

“She’s too ambitious.” “She’s way too opinionated.” “Too self-promoting—it’s so obvious she wants the job.”

And of course, that favorite of women everywhere, “She should smile more.”

By definition, anyone seeking political office is ambitious. It’s a good bet they have opinions. Strong ones, even. And if they didn’t want the job, they wouldn’t be in the running, would they?

And as for that insistence on smiling, we’re talking about candidates for Vice President of the United States, not prom queen.

Maureen Dowd wrote about this in the New York Times, quoting her own article from 1984 when Geraldine Ferraro made history as Walter Mondale’s running mate.

Mondale’s campaign guys were rude and condescending. His opponent’s press secretary called her “bitchy.” And the beloved Barbara Bush cutely referred to Ferraro as “a word that rhymes with rich.

It’s depressing how little has changed since the Mondale-Ferraro ticket lost in 49 states.

Ferraro reflected at the end of the campaign that she was “not prepared for the depth of the fury, the bigotry, and the sexism my candidacy would unleash.”

Some 30 years later, the free-floating misogyny is magnified by social media.

Research on the Democratic primary campaign found the female candidates faced more attacks from right-wing news sites and the fake news sites. (I mean the real fakes, not the mainstream media labeled fake in White House press conferences. And yes, I’m aware how odd it is to write the phrase “real fakes.”)

The Wilson Center’s Lucina Di Meco summed it all up in “#She Persisted: Women, Politics & Power in the New Media World.”

Conclusion: “The social media narratives about female candidates are more negative and mostly concerned their character, as opposed to their policies.”

Besides another reason to be annoyed—or outraged—what does this mean for us?

If all this business about charm and modesty and smiling matters so much when it comes to evaluating a possible candidate for vice president, don’t you think it enters into assessments of the rest of us?

It’s worth a hard look at the way we treat women in politics, presidential or otherwise. Because it’s still the case that age-old expectations based on sex underlie the way men and women evaluate female candidates.

Time-traveling again, Maureen Dowd did post-mortem interviews after 1984’s landslide loss for the Democrats. The things she heard from women shocked me.

”There’s a type of subconscious envy, or maybe mistrust, of a woman who has succeeded where many others have not. So instead of aggressively working to help her reach a position of prominence, we begin at an elementary level to attack. It’s a basic flaw in women’s behavior, which is to be bitchy.”

Then there was this:

“I think women in general are weak. I know that sounds awful. But we women know we have our faults. We look at ourselves and think ‘I couldn’t handle it so I don’t know if she could, either.’”

There’s one more thing we should do.

As they watch what’s already being said about the women Biden has considered, his team is also preparing for what will be said as we get closer to November.

No need to recap here all the insults the president has lobbed at his past female opponents, reporters, and others who’ve irked him in one way or another.

Biden’s campaign manager Jennifer O’Malley Dixon told the team everyone on the campaign will be expected to defend the vice-presidential nominee against the inevitable ugly, sexist attacks.

Democratic researchers are looking into sexist memes in social media groups, so they can be traced when they’re unleashed for a wider audience.

Women’s political groups are warning news media about their typical scrutiny and coverage of female candidates. They’re asking the people who run newsrooms to avoid some of their usual stereotypes.

As Congresswoman Speier says, “We need to surround her and be there to promote her. It’s our job to be the flank.”

Back in the business world, can we “be the flank” for our female colleagues? Our clients and customers? And maybe even our competitors?

I think we can. And we should.

I’ve got your back. And I hope you’ll post a comment about solidarity in the face of sexist rhetoric in politics and in our business lives.