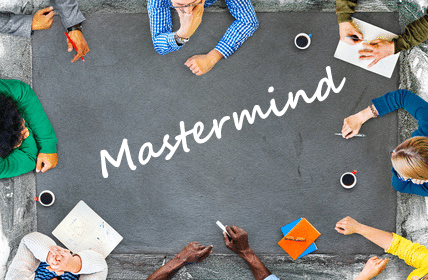 A few people have asked me, since I mentioned my mastermind group awhile back, what it is and why it’s a good thing.

So here’s the answer.

You’ll see Napoleon Hill quoted when the subject of mastermind groups comes up. In Think and Grow Rich he wrote about coordinating the knowledge and effort of two or more people, working together toward a definite purpose.

The value of a mastermind alliance, according to Hill: “No two minds ever come together without thereby creating a third, invisible intangible force, which may be likened to a third mind.”

So you combine your own brilliance with the wisdom and experience of the others in your group. And the whole is greater than the sum of its parts.

As a member of a mastermind, you get new ideas, mutual support, and of course accountability. And you can learn from others’ experience so you don’t have to make every mistake yourself.

Some groups have a facilitator, but it’s possible to put together a group of your own with no real leader. It does pay to have some structure, however.

Who would you want in your mastermind? It all depends.

I’m actually in three mastermind groups, each a little different – and each one works. You might consider one of these structures.

My weekly mastermind is 7 business owners who meet first thing Monday morning (and by first thing I mean ridiculously early!) to start the week with a bang.

We start on time and end on time. In between, each of us reports on what we’ve accomplished in the past week. And declares new goals for the coming week. And there’s time for anyone who’s grappling with a particular issue to tap into the wisdom of the group.
We’re all in different fields. Some have employees, some don’t. Some have an office, some don’t. What we have in common is being serious about growing our business.

This could work for you if you like the idea of cross-pollination with people in other businesses.

I also belong to another group where we’re all in the same business, and that has a value of its own.

My speakers mastermind meets monthly; we share resources and ideas and even referrals. And sometimes we share frustrations and concerns and complaints – it’s good to be with people who understand your situation.

This could work for you if you buy into the idea of co-opetition. Theoretically, speakers compete with one another; that may be the case in your business too. We think the cooperation trumps the competition.

The mastermind purists would say my third group isn’t a mastermind at all – it’s part of a coaching program. Coaches sometimes call their small group programs “masterminds.”

And this one is structured to create the exchange among peers that’s the hallmark of the mastermind alliance Napoleon Hill talked about.

In fact, that’s where there was all that numbers talk I mentioned earlier – we came to our intensive prepared to present our financials as if we were each other’s board of directors. It was quite an experience.

This could work for you if you’re open to coaching that includes group participation. Because in this kind of group, people are encouraged to share ideas, suggestions and experiences – if you don’t want to hear all that, you’d be better off in one-on-one coaching or in a larger group.

I’m finding my Mastermind Trifecta helpful. And … I know these groups can be messy sometimes – maybe you’ve had a different kind of experience?