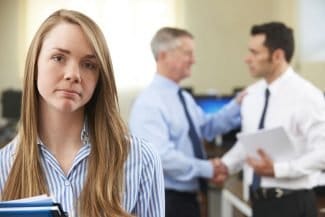 Did you catch the news that 60% of male managers are now uncomfortable in ordinary business activities with women? They worry about mentoring a woman, working alone with a woman, or eating a business dinner with a woman.

The research from LeanIn.org found senior men are way more likely to hesitate about doing any of those things with a woman versus a man who shares her level of experience.

Really? What are these guys afraid of?

The specter of a sexual harassment allegation apparently haunts male executives. They blame their heebie-jeebies on #MeToo.

They’re nervous that something they say or do will be misinterpreted. Or that their female colleague will just out-and-out lie, accuse them of something they didn’t do and get them in trouble.

More than a third of the men say they’ve avoided mentoring women or socializing with female colleagues because they were nervous about how it would look to colleagues, clients, and the little lady back home.

Okay, I’m kidding about the last part. Just because a guy refuses to align with advancement for women, it doesn’t mean he’s backward enough to call his wife “the little lady.”

My friends are more enlightened. Or not…

Surely, I thought, the men I know aren’t preoccupied with avoiding sexual harassment allegations by simply avoiding women at work.

Well, maybe a few of them are. Here’s what they told me on Facebook:

Some men see it differently.

And what do women have to say?

50% of men say that the consequences of sexual harassment are more damaging to the harassers than to those who are patronized, patted or propositioned.

The truth is, whether it’s real anxiety or a cynical smokescreen, this fear of interacting with women at work is a big barrier—for women.

LeanIn’s Sheryl Sandberg points out, “The vast majority of managers and senior leaders are men. If they are reluctant to even meet one-on-one with women, there’s no way women can get an equal shot at proving themselves.”

The reluctance to fully engage with female colleagues hurts companies too. As Sandberg says, “There’s not a company in the world that can afford to leave talent on the sidelines because it’s female.”

Aside from taking full advantage of the talent they have, LeanIn’s president says businesses benefit by hiring and promoting women. “When they employ more women, sexual harassment is less prevalent. And when women hold more leadership roles, profits are higher and workplace policies are more generous. Supporting women makes companies stronger and safer.”

You may be quaking in your boots about some woman saying something about you. Or maybe you think it’s possible for men and women to work together, support each other and create successful and profitable businesses.