You can be “Outstanding” Too 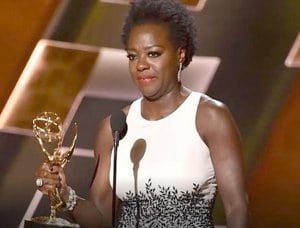 She may know how to get away with murder – I can’t say, I’ve never watched the ABC-TV show. But Viola Davis certainly knows how to give a good speech.

Most of us will never accept an award on national television. But we will get up sometime and say something to an audience somewhere. And there are many things to learn from the Emmy winners. Here are four of them.

Everyone who was nominated knew there was a chance they’d be on stage in front of hundreds of their peers and millions of television viewers. And yet, one after another they took the mic and said, “I didn’t prepare anything.” “I wasn’t expecting this.” “I don’t have any notes.”

Viola Davis was ready for her moment … and she didn’t need notes to know who to thank.

For the love of everything holy, if you think you might be giving a high-stakes talk, take the time to get ready for it.

Some Emmy winners were practically hyperventilating as they slid into their “I’m not ready” routine, apologizing with their posture and tone before they even got started.

Viola Davis took the mic, stood there regally for a moment, breathed. And then began speaking. She owned the stage.

When you pause for a beat before you begin a talk, you take command of the room. You need to command the room and connect with the individuals in your audience to succeed as a speaker.

“I’m not ready for this” – an opening could hardly get any weaker. There are a lot of good ways to begin a talk. You might remember the article I wrote about that a few months back, or you can check it out here. A quote is one possible way to start out.

Davis is working on a project for HBO, a biography of Tubman, so she didn’t read the quote from a piece of paper. She had her lines down and she delivered them flawlessly. Her preparation for this big moment was evident.

Writers, actors, producers – a lot of them launched into how thrilled they were. Or surprised. Or excited. And then there was the list of thank-yous. Their agent, their co-stars, their family. It was a lot of blah-blah to the rest of us.

Viola Davis pivoted from her Harriet Tubman quote to a strong point: “The only thing that separates women of color from anyone else is opportunity. You cannot win an Emmy for roles that are simply not there.”

I guess she told us. When you’re in front of an audience, what is the one big thing you want them to know or understand? Make that point crisply and cleanly. Notice how much Davis said in only two sentences.

She went on to thank writers and others who created those opportunities, “the awesome people — people who have redefined what it means to be beautiful, to be sexy, to be a leading woman, to be black.”

And there was a nod to other African-American actresses. Davis thanked them for “taking us over that line.”

If you were watching baseball or football on Sunday night instead of the Emmys, you can find Viola Davis here.

Or just Google her and it’ll come up on any number of sites. There’s a reason news outlets gave that particular acceptance speech so much attention. It was riveting.

We can all take a cue from the 2015 Outstanding Lead Actress in a Drama next time we’re in front of an audience.