Come Out, Come Out, Wherever You Are

What are you hiding from?

Okay, maybe you’re one of those people who bravely seizes every opportunity. You put yourself out there—front and center. You don’t always get what you want, but you know that if you don’t ask, you don’t give ‘em a chance to say “yes.”

What are you hiding from? And why? And what would it take for you to step into the spotlight?

You might wonder what I know about hiding. Come back with me to my radio career, to those heady days when the ensemble morning show was a new phenomenon. Yes! They had actual women on those shows: the “news girl” or the “traffic chick.”

At Larry Lujack’s show on WLS, I was emerging as a real radio personality—and I was having a ball with those guys.

There was a new woman on TV too. Over at Channel 7 on “Good Morning, Chicago” Oprah Winfrey was just getting started. And she was thinking it would be great to invite some of those radio women to be on her show.

Oprah’s producer called me—can you imagine what an opportunity that was?

Of course, I was supposed to be on the air with Larry until Oprah’s show was already starting. And then I had to go over to City Hall or someplace where news was allegedly happening and cover that.

And my boss would have been only too happy to tell you his news anchors were not supposed to be “personalities.”

He put the kibosh on the whole idea. And get this. I was glad.

Yes. I was eager for a reason not to be on Oprah’s show.

Because I was terrified to be seen. I already got the occasional hate mail about not looking like the glamor-puss people expected me to be. And they say television adds 10 pounds!!!!

I didn’t even try to change the big guy’s mind. He gave me cover for ducking this opportunity. What if I got on TV and looked ridiculous? What if I said something stupid? What if I made a fool of myself?

You might ask, what would have happened if I’d gone on Oprah’s show and been fabulous? We’ll never know. And, interestingly, the possibility never occurred to me. I was too busy hiding.

Fast forward by 8 or 9 years. WLS, the Rock of Chicago is gone. We’re a talk station now, I’m still doing the news, and it’s not nearly as much fun. It’s not an ensemble anymore—the news people just read the news. I’m itching to do something else, something more challenging, something with a much higher profile.

There’s a substitute host on the air this afternoon and he’s boring as hell. So, I wander down to the program director’s office and casually say, “Are you listening to this? You know … I could do better than this.”

The PD is momentarily stunned. And then he sees the possibility … of publicity.

He declares “The Week of Women.” A different woman does the evening show every night, see, as a sort of on-air audition. Monday night was mine. 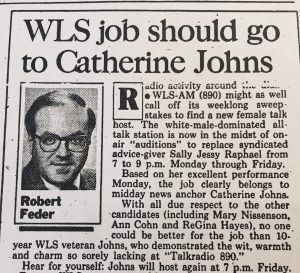 And on Tuesday morning, the Sun-Times says, “WLS might as well call off its weeklong sweepstakes to find a new female talk show host. Based on her excellent performance Monday, the job clearly belongs to news anchor Catherine Johns.”

The program director was surprised at how good I was for a first-time talk show host. And how fabulous the response from the audience was. The phones rang, the people were terrific. And I was off to a successful start, not as a side-chick, but as the host of my own show.

What would have happened if I’d never gone in and pitched myself as a talk show host? We’ll never know. And to tell you the truth, the possibility never occurred to me. I was done hiding.

So, what about you? What can you do if you’re ready to stop hiding?

Take a cue from my second story. Focus on what you can gain if you go for it. I was excited about the possibility of a much more interesting, higher-paying gig. That made it worth taking a risk. What’s the benefit if you come out of hiding?

Start right now to take up more space. Plant your feet firmly, whether you’re seated or standing. Straighten your spine, expand your chest, breathe fully and deeply. Really look as if you’re in command of yourself.

Use a bigger voice. Speak from your core, take your time, and pause for emphasis. You’re worth listening to.

Maybe you need a change of style? Get a professional opinion about your wardrobe, your hair and make-up. How would you be showing up if you were really comfortable with attention?

Try “yes” as your default response. Some of us are better at this than others. If you automatically make a list of reasons not to go for it, see if you can switch that around. Just give it a try for a while—you can always go back to what didn’t work.

Ask yourself, “What would be possible if …”

Imagine what success would look like, what it would feel like. Now step into that image you’ve created.

Maybe neither one of us will be on Oprah’s show at this point. But you have a lot to accomplish and so do I. We can do that, both of us. If we’re not hiding.

You can practice right now.

Just post a comment below and tell me what you’re going to do to step into the spotlight.