Conversations Connect us. Or Not. 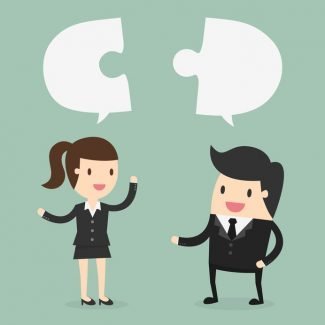 You know how it feels when a conversation is so much fun you wish it could go on forever?

Frank and I had one of those when we went to dinner with a business friend of mine. She and I had never been out socially; we’d certainly never met each other’s husbands. Still, it seemed like a red-hot idea to meet for dinner…

And it turned out it really was a red-hot idea. The four of us had a ball! I learned things I’d never have guessed about Laurie’s life. She eagerly tuned in for my radio war-stories. I got to know her husband Tom and his exciting plans for the future. They were fascinated by Frank’s tales of life on the road as a trombone player.

We talked and laughed for hours and could have carried on the conversation even longer. But at some point, you know, the waitstaff is ready for diners to depart.

What made for such a fabulous, fun evening?

Laurie Guest and I are professional speakers; we know how to tell a story and how to draw people into it.

As Laurie put it, “Our dinner conversation went so well (4 hours’ worth) because everyone took turns with an audience who were constantly leaning in.”

On the other hand …

I’m developing relationships with folks in a networking group, scheduling a few get-to-know-you phone calls. So far, I’m hearing a lot about their work. And their backgrounds. And their plans. And…well, you get the idea.

I listened to one guy for 15 minutes straight before I finally had the chance to say anything about my own work, or my hopes for this group, or anything else. (That chance didn’t last very long.)

Which kind of conversation would you rather have?

Frank tells the story of the celebrity singer and the back-up musician having an off-stage chat. After going into excruciating detail about his career and his love-life and that great gig he has coming up, the singer finally says, “But that’s enough about me, man. Let’s talk about you. What do you think about my singing?”

That me-me-me-I-I-I thing isn’t limited to famous vocalists, is it? Plenty of people seem to think the whole world is fascinated with every detail of their life, while they show precious little interest in the rest of us.

Maybe you recognize someone you know in that description. You might even be getting the uncomfortable feeling that you have, on occasion, done a little too much self-ing.

Here’s how to step up your conversational game.

Yes, “What do you do?” is a question. Maybe you could come up with a question that has a little more juice.

Here are a few I like to use when I meet someone new, or when I run into someone I already know:

“What have you learned lately?

“Tell me about your favorite client…”

I often ask, “What’s your story, (First and Last Name)? It’s open-ended; it gives a person a chance to say anything they want me to know about them. Using their name helps me remember it. And people respond to the sound of their own name; their brains literally light up when they hear it. (I love the idea of lighting up someone’s brain!)

That means really listen, focusing your attention on the person talking. Not looking over their shoulder at someone else you want to meet, or at the door to see who just showed up.

Yes, listening can be a challenge; I think it’s way more difficult than talking. You’ll find some strategies for better listening here.

When somebody asks me what I do, I like to tell a story about a speaking gig or a coaching engagement or a special client. It’s usually a story in three parts, which is to say three sentences or not much more than that.

Think of your what-I-do story as an appetizer for a conversation; it should make them want more. A well-told story is way more engaging than a label or a description of the process I follow in my work.

You’ve had a chance to tell someone about yourself. Or your business. Or your support for that cause or candidate. You’ve held forth.

Before you even think about going on to another subject. Before you wait for their follow-up question. Before you add another story to the one you just told…offer reciprocity.

The easiest way to do that is with a tag question. You say what you have to say, then tag it with a question like “And what about you?” “Maybe your experience is different?” “How do you see that issue?”

You toss the conversational ball back to them, so they’re really in the game; they’re not just serving as a backdrop for you.

The tag question is inclusive. And when everybody has a chance to play, the game is a much richer experience for all. If you want deeper, fuller conversations, you’d be smart to make tag questions a habit.

The word conversation comes from Latin by way of Middle English. It meant “living among, familiarity, or intimacy.”

So, the very word implies a real connection among the people involved. We can’t just spew our stuff at someone and call it a conversation.

Last word from Laurie Guest: “The art of conversation starts and ends with authentic interest in the other person.”

You know I’m always interested in conversation with you, even when it’s not in person.