Cues for you from the Washington ruckus 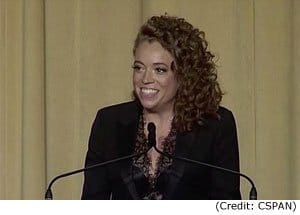 It’s whipsawed me in a big way. I saw Michelle Wolf’s routine live; it made me so uncomfortable I almost changed the channel.

(Yes, they call the dinner “the nerd prom.” I don’t even want to think about what they’d call a woman who’s home on Saturday night watching the Nerd Prom on TV.)

Wolf had some good lines. Loved the “not accomplishing anything” shot she took at Congress, Poking fun at CNN’s relentless “Breaking News” graphics made me laugh. When she tweaked Rachel Madow for her long, meandering monologues—that resonated. Even scrapping jokes about cabinet members because they’ve all been fired got a smile.

The trouble started for me when Wolf said, “We should definitely talk about the women in the Trump administration.”

Maybe she shouldn’t have talked about the women in the Trump administration, at least not the way she did. Her comments about Kellyanne Conway and especially Sarah Huckabee Sanders set off a firestorm of criticism.

My reaction: the monologue was too mean for my taste. I’ve never been a fan of insult comedy. I didn’t like it any better from this hip young woman than I did years ago from Don Rickles.

I felt bad for Sarah Sanders, in particular; sympathy put me “on her side.”

But the pendulum swings, doesn’t it?

Within hours, people were piling on Michelle Wolf, and I found my sympathies with her. The president blasted her, of course. So did all kinds of columnists. And those perpetually- yapping-panelists on TV.

Prominent members of the White House Correspondents Association tweeted their tsk-tsks. The Association president threw the comic under the bus: The “program was supposed to offer a unifying message…not to divide people. Unfortunately, the entertainer’s monologue was not in the spirit of that mission.”

We can assume they were also worried about whether Sarah Sanders would ever call on them again in press briefings. Whether Kellyanne Conway would appear on their TV shows. Whether the president would deign to chat with them again on Air Force One.

This points to the fundamental flaw in an event for journalists that includes the very people those journalists are supposed to be watching, interviewing and reporting on. Maybe next year, the White House Correspondents should celebrate the First Amendment by themselves, and let the pols have their own party.

The brouhaha also gives us some clues about how to handle ourselves in front of an audience.

Who are they? What do they expect from you? How can you best deliver it?

And what do you want them to think, feel or do after they hear what you have to say?

When it comes to humor, be careful.

Most of us, when we’re speaking, aren’t mainly trying to be funny. We’re out to inform or educate or advocate for a position. But humor does help a speaker connect with the audience, keep people engaged, and get their buy-in.

Unless it goes south. So avoid humor that could be construed as racist, sexist, ableist or any other kind of –ist. You want to be provocative but not offensive.

The best target for a funny remark is, of course, you. Self-effacing humor works well, especially for speakers who have a lot of personal presence. (Used badly, or by someone who seems weak, it can come off as a lack of confidence.)

This doesn’t make me happy, but I’m convinced we’d be having a different national conversation if, say, a Michael Wolf did the routine at that dinner.

I suspect a man would not have said, “We should definitely talk about the women in the Trump administration.” Male comedians don’t hold back from tweaking the Trump women…but I’d be surprised if they’d package those lines together and label them that way.

So in a sense, Michelle Wolf had more freedom than a guy would have to skewer women.

But I also think the reactions to Wolf’s jabs were much stronger because she’s a woman. And there’s still an expectation that women should be nice. That they won’t play as rough as the guys do. Comedian Guy Branum says Wolf “is to some extent being criticized because we don’t expect a woman to be that harsh.”

We’ve come a long way and all that jazz. But we still run into gender-based expectations. And female performers have less leeway with a big portion of the public when it comes to vulgar language, vivid put-downs, or even taking strong stands.

Wolf told NPR’s Terry Gross, people look at a woman and think, “’Oh, she’ll be nice…’ I think they still have preconceived notions of how women will present themselves, and I don’t fit in that box.”

Michelle Wolf ran into a buzzsaw for a lot of reasons. Being an outspoken, expectation-defying woman was one of them.

Which could be a cautionary note for other outspoken, expectation-defying women. Not to hold back, necessarily. But when they don’t hold back, to be prepared for the backlash.

Maybe you have another take-away from the controversy? Tell us about it in a comment below.