Debate Takeaways for You and Me 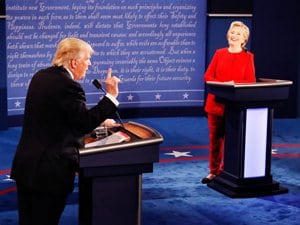 A political campaign is, in a sense, a huge, high-stakes marketing effort. And that makes it an opportunity for us to see what works—and what doesn’t—in capturing attention, enlisting support and making a sale.

Here are some things I’ll be sharing with my clients from this week’s debate.

Hillary Clinton is legendary for diligent preparation and attention to detail. And it showed.

Naturally, some blasted her for being over-rehearsed. A New York Times analysis referred to “prefab one-liners.” The Federalist said, “She had a weird, obviously false, and inauthentic smile.” Politico had her “delivering a carefully scripted attack.”

On balance though, Clinton sounded knowledgeable, well-prepared and even-tempered. She knew what she intended to say and she said it.

And you know what his campaign staff says about Donald Trump. “Let Trump be Trump.” He’s at his best talking off the cuff, connecting with a crowd—one of his aides predicted before the debate there would be only one guy on the stage who’s “comfortable in his own skin.”

That in-the-moment energy pays off for Trump most of the time. It’s a big part of his appeal. But in the structured debate it didn’t go as well for him. His timing was off, his lack of preparation showed; people used words like “flailing” and “flippant” to describe him.

Bottom line for us? I hate to practice a talk, maybe you do too. And—we need to take a cue from Clinton.

Most every professional debate-watcher gave the opening segment to Trump. It took Clinton a while to warm up whereas he came out with a strong statement about international trade and its impact on American workers, putting her on the defensive.

Even Clinton partisans conceded that the first half hour or so she was a little flat. She’s a tortoise, not a hare, right? Slow and steady got her through the 90 minutes, while Trump seemed to lose energy and focus as the night wore on.

Here’s the thing. Most of us don’t have 90 minutes of attention from our audience. We’re competing with their phones, not to mention everything else going on in their lives. If we don’t get their attention from jump, we may not get it at all.

Humor helps. And so does a well-told story.

And no, we didn’t get much of them from either candidate this time. Clinton did mention her father and his business. And of course she told a few stories about Trump’s businesses.

But for the most part she gave us information and he repeated the bromides in his stump speeches. Neither one of them used story-telling the way they could have.

A meaningful story, well-told is really the best way for a speaker to make a point and make it memorable.

And while you may have had a chuckle at the expense of the candidate you’re not voting for, there weren’t many of the light moments that can keep listeners engaged during a talk.

We can do better when it’s our turn to speak, don’t you think?

Poor Lester Holt, trying to keep the show on schedule. Trump, especially, made that a challenge. And in the end, it didn’t serve him well.

A Facebook friend said, “As a supporter of Mr. Trump, I think Holt did the democratic nominee a favor by letting Mr. Trump rant in the last 20 minutes of the debate. I thought Mr. Trump “won” the first hour twenty minutes of the debate. However, I think his non-stop talking while Holt attempted to stop him near the end, was so frustrating even to his supporters, that it left me feeling that the debate ended in a coin flip.”

Speakers often imagine that time is elastic. Their content is so important it doesn’t matter if they go over their limit. They don’t want to be constrained by the clock.

It’s always a mistake, trying to put ten pounds in a five-pound bag. When you’re given a time limit for your talk, respect it.

Because it shows respect for your host and your audience. Keep talking when your time is up and they will feel the disrespect.

If there’s an elephant in the room, pet it.

In this case the elephant was sniffling. The noise from Donald Trump’s nose got a lot of attention. Maybe you saw the meme showing Hillary Clinton next to a guy using nasal spray.

The Tweet-fest started immediately and included references to sniffing and cocaine-use.

Trump could have headed that off with a simple, “’Scuse me, I have a cold.” Or hay fever. Or whatever he has.

Yes, he created a challenge for himself when he made a federal case out of Clinton’s cough. She had a hacking fit at the lectern not long ago. She also handled it with a joke about being allergic to Trump.

Having made much of her physical well-being or lack of it, I’m guessing Trump didn’t want to admit any weakness.

I say he would have been better off to acknowledge the issue, put it to rest and move on. Without that acknowledgment, the nose-noise became a bigger focus than it needed to be. 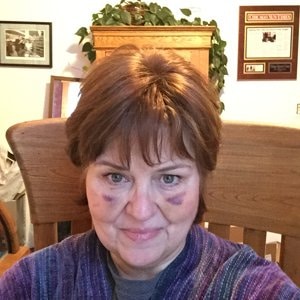 I did a couple of talks last year with two black eyes. Yes, it was odd to get in front of an audience looking like this. And we all got over it once I said – slipped on the ice, fell on my face, now let’s talk about you.

Had I ignored the obvious issue, it would have been a distraction for the whole talk.

You have a plan put this learning to use? Or another lesson you picked up from the debate? I want to hear about it. Post a comment.