How NOT to give ’em the bad news 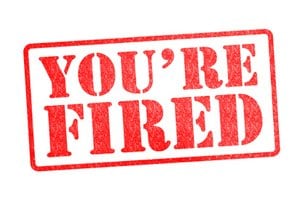 Did the axe falling on FBI Director James Comey bring back memories for you?

Me, I’ve been told to make myself available for other opportunities. A bunch of times. And in a bunch of bad ways.

At least I’ve never heard the news first from the TV.

The director was talking to FBI staff in Los Angeles when the bulletin about his dismissal came on the television behind him. They say Comey thought it was a prank at first. Because who would imagine even the most graceless boss would handle it like that?

But Donald Trump is by no means the only one who gets this wrong, is he?

When I got blown out of WLS, I knew it was over when I went to meet with my boss and the HR guy was there too. HR in the room? That’s like seeing the Angel of Death.

Including a witness is not unusual in these litigious times. But it is bad form according to a recent Entrepreneur article. “Studies found having a third party in the room is viewed as a lack of respect.”

This is No Time for Technology

At WJMK, the program director called me at home to tell me I didn’t need to come in to work the next day. Or ever.

That’s also in the category of “not recommended.”

The experts at Intuit say: “RadioShack and others have been criticized for being cold, impersonal, and non-professional, sending email to notify employees their position has been eliminated. You also don’t want to deliver bad news over the telephone; face-to-face is best.”

You’re Doing it Where?

And then there was that consulting firm where, for some reason, they thought the best place to have The Talk was the restaurant down the street. So when the bosses insisted on taking me out for coffee, I knew I was toast.

My guess is they hoped to avoid emotional scenes by delivering bad news in that cute café. For people who called themselves communication consultants, that’s kind of tone-deaf, isn’t it?

Pro tip from US News & World Report: “When you have to deliver bad news to an individual, make sure that it is in a private setting and at a time when he or she can hear the bad news.”

Entrepreneur points to research that shows people are more empathetic in person compared to email or phone. And says flatly, the right place for the axe to fall is “in private, in person, in the office.”

If you’ve ever had to tell someone they’re about to be unemployed, you know it’s not easy. That’s why there’s so much written about how to deliver the news. It’s a tough part of leading a team for all but the most cold-hearted among us.

(Of course it’s harder still to be the one getting fired. Or laid off. Or terminated. Or pink slipped. Or RIF-ed. Or not renewed. I always figured it didn’t much matter what they called it. The end result was the same. The gig was over.)

The specific suggestions may vary, but they all come down to one basic idea.

Georgetown Professor Robert Beis told Forbes the main thing is to treat people with respect and dignity. He acknowledged it doesn’t always happen that way. “Sometimes employees are fired via e‐mail or find out they lost their jobs when their names are deleted from company directories…sending a clear message that people do not matter.”

Right. And sometimes they find out they lost their job on the TV news. Talk about sending a clear message!

Odds are you’ve been on one side of the desk or the other in a conversation about “going in a different direction.” Post a comment below to share the lessons learned.