Do You WANT Them To Ignore You? 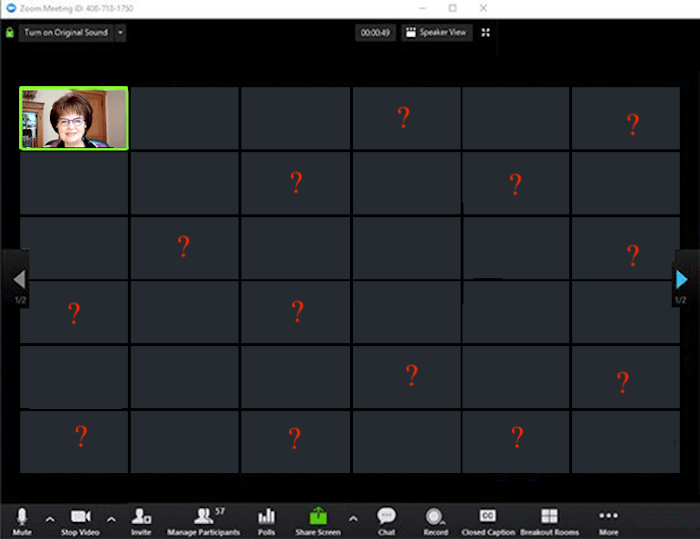 If you don’t want to be overlooked, you must be willing to be seen.

I’m on a one-woman crusade against hiding. And I have been since even before this era of virtual meetings and conferences.

And yet. We sign into a Zoom gathering and see black boxes all over our screens.

I did a workshop not long ago for smart women seeking a stronger executive presence so they can accomplish more in their impressive corporate positions. Close to half of them insisted on keeping their video off even after I practically begged them to turn on their cameras.

Okay, yes, you can make the case that team meetings, for instance, are more productive and “Zoom-fatigue” is reduced when groups agree to eliminate video. Some social scientists have made that case. They suggest making a virtual meeting more like an old-fashioned teleconference, transported to a more current platform.

If our distributed department meets every Tuesday on MS Teams, it might make sense for us to have a conversation without looking at each other. Although I’d argue that the visual component of communication is so powerful, we’re missing something when we forego it.

In any event, why would someone who’s interested in a more powerful presence be so intent on not being present? What sense does it make to show up for a virtual networking event and not show up on the screen? And when we’re likely to encounter someone who doesn’t already know us well, who’s maybe meeting us for the first time, why would we want to hide from them?

It genuinely puzzles me.

And then I think about programs I’ve done in actual conference rooms with real, live, human beings in the chairs. Invariably, someone comes in early and stakes out a seat way in the back corner, as far from the speaker-spot as they could possibly get without heading out to the hallway.

Now and again, I get there well before start time and block those back rows. There’s a certain sort of person who will make a beeline for that back corner spot and sit there anyway. They seem to imagine that somehow that position makes them invisible.

It doesn’t. We all see them trying not to be seen, don’t we?

Believe me when I tell you I get it. We do take a risk when we become visible.

Especially for women, when we agree to show up fully and be seen, we can be pretty sure someone might criticize what they’re seeing. Maybe silently, in their own head. But it’s entirely possible that somebody in that meeting will make a comment to a colleague, or even to us, that indicates they’re not exactly impressed with what they see when they see us.

As a long-time radio personality, I could claim to be an expert on not being seen. I liked being heard, for sure. But seen? That carried the risk of being mocked or criticized or dismissed for not looking the way some random listener thought I should look.

I got very adept at hiding behind a microphone. Not unlike those professionals who show up in the Zoom room with their cameras off.

And I learned something from that experience.

When it comes to our business, we can’t afford to hide.

It’s possible you have some physical imperfection. Most of us do.

Me? I have mismatched eyes, a lopsided mouth, and one too many chins. Oh well. I can’t afford to let that concern about how I look and what they might be thinking stop me from showing up.

And neither can you.

Whether you are a company of one seeking customers or clients. Or a corporate executive wanting to move up. Or you’re in between things, and your search includes virtual networking. You don’t do yourself any favor when you go for invisibility.

Promise me this, will you?

Stop flying under the radar.

Stop letting others get the attention—and the credit—that you deserve.

Or are you still feeling a little fearful?

Help yourself to some time on my calendar.  Let’s talk about some coaching to give you the confidence and the skills you need to be seen, be heard, and be successful.