Doing It The Old-Fashioned Way 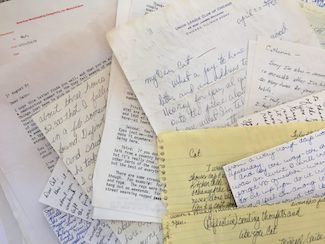 When was the last time you wrote a letter? I don’t mean an email or a text or a tweet.

I mean an honest-to-goodness, put-pen-to-paper, slide-it-into-an-envelope letter involving a stamp and a trip to the Post Office.

I’ve been pondering this question since I unearthed a folder full of letters in my desk. This might sound silly, but I’d forgotten that we used to write letters.

Emptying my big, old, roll-top desk is part of an office overhaul. It was such a mess in there I had to call in the cavalry and get a professional to restore—or maybe I should say create—some kind of order. Shery Hill has been a huge help organizing all that stuff and, to be candid, keeping me on task. I have to admit, though, my attention wandered when I came across The Letters.

Oh, my goodness…what a walk down memory lane. A manila folder stuffed with letters going back years.

Mushy missives from one-time significant others, all of them insignificant now. College boyfriends, summer flings, that guy I met during a WLS remote. One man traveled—a lot! He’d written to me from Tokyo, Paris, and Belleville, IL. Some writers pledged undying love. Others broke the news: the love was already dead.

Girlfriends wrote with condolences about the lost loves…news that they were having babies … or thanks for a gift, a surprise or moral support. They complained about their husbands or boyfriends. (Mostly they had one or the other, not both.)

Family letters! My brother admitted he missed me the first Christmas I was away from home. My enthusiastic sister described her first week at Indiana University. (“I love it here! We’re having just the best time!”)

Somewhere along the line, my mom sent me the letter I’d written her the night before my first radio show at the Valparaiso University campus station. I told her in round, girly handwriting that I was “scared spitless.” (She was my mother after all.)

And my 50-ish father tried to turn back the hands of time in a thank-you note.

Funny guys—I have letters from a lot of them. The boys in broadcasting can be entertaining. A Cleveland co-anchor summed up the state of AM radio, in the era of SNL.

A soon-to-be-boss confirmed my employment in Houston: “you have been hired. the offer was made. you did not refuse. you are hired. no shit. okay?” He said the shift key was broken.

Houston didn’t last long, and when I was looking again, I got a rejection-and-I-mean-rejection from AP Radio in Washington: 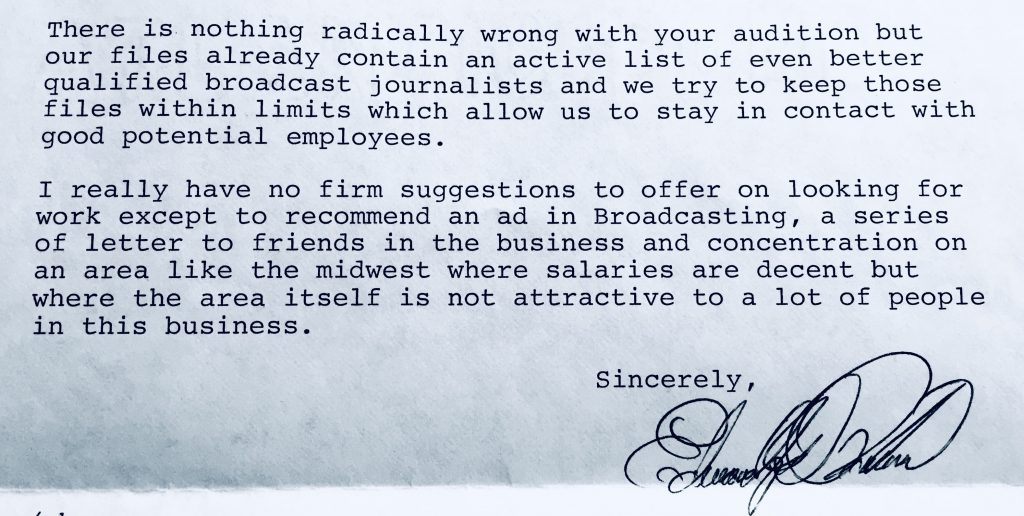 I guess it was good advice to look in the unattractive Midwest. After a year in Cleveland, there was this from the president of ABC. 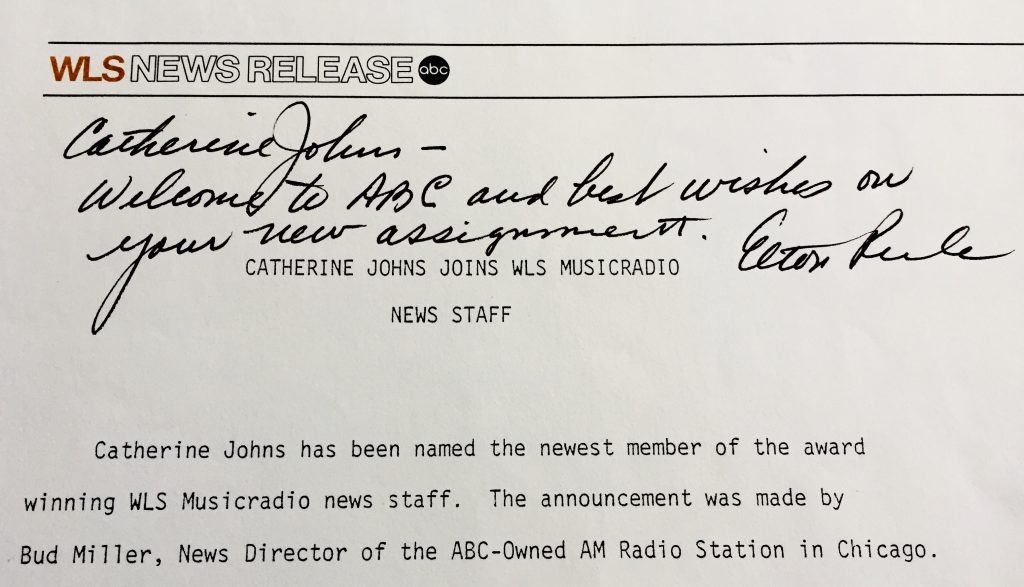 Is all this making you think about the letters you have stashed away in a drawer? Or maybe the ones you wrote that someone else kept? There’s something about putting your words on paper in your own handwriting that gives them impact, don’t you think?

I guess the impact is the issue, when I think about the letters I reread last week. Would I have felt the same nostalgia, amusement, or affection if I’d read the words on a screen instead? I’m not sure I would.

And I might want to have that experience again. I tossed a few that were super-embarrassing. (I’ve been reading about that “Swedish Death-Cleaning” book.) A handful that have just lost their juice over the years. And one that sounded heart-felt—“I have to tell you I’ve met another”—but I had no idea who wrote it.

The rest are back in the desk where I can read them again in another 10, 20 years.

I also wrote a letter. A thank-you note to someone who said something at a meeting that helped me. I would have come home and dashed off an email. But after I’d marveled at all those handwritten letters, I thought, “This will have more impact if I sit down with my purple pen and write it.”

And I’m going to do it again. My goal: write a letter every week. Could be a thank-you or condolences or I’m-thinking-of-you. It probably won’t be pouring my heart out onto three or four pages. But even a quick note can make an impact.

I wonder if you’d join me in my plan to bring back letter-writing?