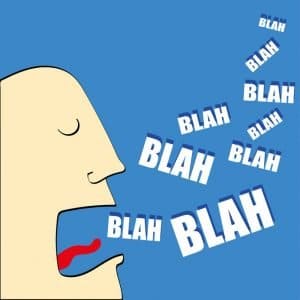 There were a few standout moments: pointed questions, testy exchanges among senators, Cory Booker boasting about breaking Senate rules. Demonstrators added drama standing up, shouting and being escorted out of the room.

For the most part, though, it was a week’s worth of tedium. The New York Times Supreme Court correspondent summed up Kavanaugh’s strategy: “Say nothing, say it at great length, and then say it again.”

That’s pretty much standard for Supreme Court nominees, and has been for 30 years or more.

And, judging from some recent business meetings and social exchanges, a lot of other people are following the same playbook.

It may work for those judicial nominees. But those of us who are not headed for the high court should be doing the exact opposite.

Say something that means something instead of saying nothing.

Yes, there’s a place for idle conversation and social chit-chat. And, it’s a smaller place all the time, don’t you think?

We’re inundated with information, explanations and opinions…and we’re actually interested in some of it. But it often seems we have to wade through the blahblah to find it.

Listening to a lot of people is like trying to read an article online. You know there’s a nugget there, something you want to know more about. But you can’t get to it because of pop-up ads and subscription offers and those boxes asking if this site can access your location. It’s maddening.

Our good friends probably put up with our verbal clutter and we do the same for them. But when your business depends on communicating with clients or colleagues (or anyone else) it’s smart not to sound like Charlie Brown’s teacher.

You get points for being pithy, not for great length.

Supreme Court nominees may indeed benefit from being long-winded. For the rest of us, it’s best to put a period on it sooner rather than later.

How soon? You probably have longer than seven seconds. That whole story about the average human being having a shorter attention span than a goldfish has been debunked.

But most of us know from our own experience that we lose interest when people go on and on and on. (Unless, of course, they’re talking about us.) So it stands to reason that they get similarly impatient when we blather too long.

What seems “too long” to a listener? It’s likely less than a minute. You might want to refresh your memory about the DJ’s green-yellow-red system for making it snappy. [make this line a link to https://catherinejohns.com/are-they-still-listening/ – it should open in a separate window]

Once is (usually) enough. No need to say it again.

It’s true that repetition can be a valuable rhetorical device. You’ll hear it in famous speeches. In poetry. In the chorus of a song. That recurring word or phrase or sentence can have tremendous power.

You’ll also hear repetition in everyday conversations with a coworker, a relative or a friend. In this case, it’s usually much less powerful.

In fact, our eyes glaze over when they launch into a reworded version of the point they just made. We heard it the first time, didn’t we? Making the same point, even in slightly different words, is boring at best. It can even feel like we’re being bludgeoned.

If you hear yourself saying, “In other words…” or “So again…” that’s a good time to stop. Better yet, ask a question that invites your conversational partner to take the floor.

“Say nothing, say it at great length, and then say it again” might work if you’re aiming for a spot on the U.S. Supreme Court.

If your goal is building a business relationship, making a sale, or creating a connection with a colleague, you’re better off to follow the advice I give my clients and try mightily to live by, myself…

Say it once, say it well, and zip it.