Pick Yourself Up, Dust Yourself Off 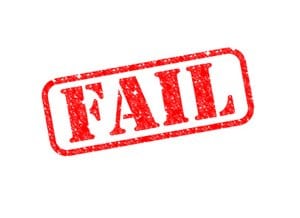 It holds so many people back from sharing their knowledge, experience and wisdom with the world. They’re just flat-out afraid to stand up in front of people and speak their piece.

There’s no shame in the fear; most of us feel it sometimes. Some of us move beyond it and put ourselves out there anyway. Because we have a message worth sharing. Or a cause worth supporting. Or because it’s the best way to grow our business.

Occasionally, our worst fears come true. There we are, with a roomful of people watching, and things go south.

Like that time when every kid in my Fourth Grade Sunday School class got a Holy Bible. With our name printed in gold letters right on the front!

When Reverend Robinson called my name to come up and get my special Bible … I bumped into the little table sitting up there in front of the sanctuary. And the whole stack of Good Books tumbled to the floor.

The Reverend played it light. “There goes the alphabetical order,” he said.

And the whole congregation laughed. At me.

Or how about just this past summer, when I tried out a challenging-for-me way of speaking in a group training session. It did not go well. In fact, the coach actually told me, right there in front of everybody, “You’re so bad at this, you probably shouldn’t be doing it.”

At least the group didn’t laugh. But I was no less mortified.

When that kind of thing happens, it helps to remember that our worst fear is usually not as totally terrible as we’ve made it out to be.

You probably heard that singer Patti Smith had one of those fears-come-true moments at the Nobel Prize ceremony in Stockholm. Honoring Bob Dylan’s Nobel Prize in Literature, she sang his classic “A Hard Rain’s A-Gonna Fall,” accompanied by a full and very talented classical orchestra. With the King and Queen of Sweden and a concert hall full of luminaries listening to every note.

And then she finished the song. If you haven’t heard it, the video’s worth watching.

Many of us, when our performance falls short, are tempted to hide.

Patti Smith did not hide. She wrote an essay about the experience and sent it in to The New Yorker.

Smith wrote about a wave of emotions: “Unaccustomed to such an overwhelming case of nerves, I was unable to continue. I hadn’t forgotten the words that were now a part of me. I was simply unable to draw them out.”

She described singing with all her being—and still stumbling, noting the irony in that:

“It was not lost on me that the narrative of the song begins with the words ‘I stumbled alongside of twelve misty mountains,’ and ends with the line ‘And I’ll know my song well before I start singing.’ As I took my seat, I felt the humiliating sting of failure, but also the strange realization that I had somehow entered and truly lived the world of the lyrics.”

“The humiliating sting of failure.” We’ve been there, haven’t we?

The important thing is—not to let it stop you. I’ve written before that when things go wrong in a talk (and they do!) the best response is to make your misstep part of the show and keep right on going.

I’d add one more thing. Whatever went wrong, own it. Whether you forgot what you meant to say, or botched an answer to a question, had a technical snafu, or otherwise stumbled on stage…own it.

That goes beyond not quitting or not hiding. What Patti Smith did, writing in The New Yorker about the Nobel episode, was bigger than simply not quitting and not going into hiding. She owned every bit of her flawed yet fabulous performance.

Because in the end, she realized it wasn’t about her: “Why do we commit our work? Why do we perform? It is above all for the entertainment and transformation of the people. It is all for them.”

Yes. When we make the work all about us, our mistakes are devastating, sometimes even career-ending. When we do our speaking, our teaching, our performing for them…everything changes.

Do your work all for them—your listeners, your prospects, your people. May you never suffer the humiliating sting of failure. But if you do fail, may you own it.

(Oh, and may you comment below and tell us all about it!)