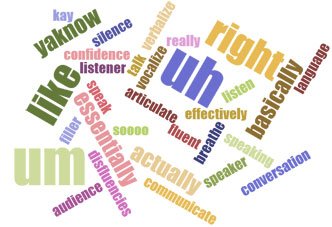 You may have heard my pitch for the pause. Sometimes the most dramatic part of a talk is the time you’re not talking.

Whether you’re having a casual conversation or giving a speech or introducing yourself. A little breathing room gives your words more weight. Helps your listener understand you. And demonstrates considerable confidence.

What gets in the way of the pause? Fillers like “um, uh, like, y’know, sooooooo, ‘kay.” They’re unnecessary words that just, well, fill up the space. “Basically” is a common one. “Effectively.” “Essentially.” “Actually.” And “right?”

I wrestle with “right” myself. I’ve caught myself using it where it’s not needed. Whatever I just said, of course it’s right – there’s no need to ask. Unless it’s a genuine question, of course.

But this habit of sticking “right” at the end of a sentence, it isn’t really about asking anybody anything. It’s a habit a lot of speakers have. And an irritating one at that.

Sometimes we get stuck on longer phrases that become repetitive. The repetition makes them noticeable. And aggravating. Know what I mean? Yes – that’s one of them. Often abbreviated to something close to “nuhmeen?”

Trainers, and others who hope their listeners are learning, are taught to check for understanding. To make sure they’re not losing people. That seems like a good idea until it becomes automatic. How often have you heard someone tag every other statement with “Does that make sense?”

That’s a risky question to ask. Because it suggests that the speaker is unsure about his own skill at making a point. Or that she thinks her listeners are dummies who don’t quite get it – it can come off as quite patronizing. Those aren’t the impressions we want to leave with our audience.

I was in a group where the speaker dropped in over and over and over, “Are you with me.” There’s no question mark there – by design. Because she didn’t say it as a question. Her tone suggested that we better damn well be with her or else!

How do you know if you’ve developed one of these annoying vocal habits?

Sometimes your audience will tell you. I was doing some training on professional presence for job-seekers. I realized I’d defaulted too often to asking, “Is that clear?” … the third time a guy in the group said, “Crystal.”

Other ways to identify your favorite fillers are to recruit a friend who will give you honest feedback. Or listen to a recording of yourself speaking. Yes, it can be painful to hear your disfluencies; it’s also very helpful.

If you’re doing a lot of um-ing and er-ing and like-y’know-ing, you’ll do yourself (and your listeners!) a favor to minimize all that.

Doesn’t mean you must eliminate all your verbal tics all the time. Yes, I know, there are groups that work very hard to train their members to eradicate every one of their non-words.

I don’t agree with that intense focus on filler. If you’re in the moment with your audience and engaged in your own content, the occasional vocalized pause can wind up sounding thoughtful, conversational and natural. And speakers who never use any fillers can come off as robotic and over-rehearsed.

But it’s a fine line. Too many “um, uhs” “reallys” and “likes” will make people take you less seriously. They start to wonder if you know what you’re talking about.

So what’s the solution? Once you’ve figured out your default filler, try slowing down a bit. Focus on the people you’re talking to – get very intentional about that. Steady, direct eye contact can help.

And get comfortable with pausing between words and sentences. That little breath of silence is welcome on both sides of a conversation. Don’t blow through it with sounds we don’t need to hear.

And hey, I’m curious. If you have a favorite bit of filler language, tell us what it is in the comments.