She’s got some things to say. Do you? 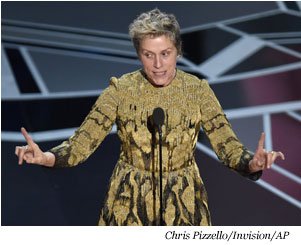 Few things are more boring than the endless expressions of gratitude that pass for acceptance speeches at awards shows. Thank you to “my agent”…“my children”… “my 8th grade social studies teacher”… blahblahblah.

And then there was Frances McDormand. She got a round of applause (and some laughter) when she took the mic at the Oscars and announced, “I’ve got some things to say.”

The quirky actor is known for speaking her mind. I’ve got some things to say about that. And about what it has to do with you.

This year’s Oscar broadcast was mostly a snoozefest. You may have tuned out early—or maybe you never turned it on in the first place; the audience for these things gets smaller every year. If you missed the Best Actress award, you can catch up here.

When they announced McDormand as the winner, I sat up and paid attention. I’d been hoping she’d win…and not only because I thought she was terrific in “Three Billboards Outside Ebbing Missouri.” I was rooting for her because I expected her to be way more interesting than her Hollywood colleagues.

I wasn’t alone. There was a charge in the room when her name was announced. Frances McDormand—no telling what she might say.

The audience perks up when you’re unpredictable.

People tune out when speakers tread familiar ground. If they’ve heard it all before, they’re not all that interested in hearing it again from you.

You’ll be much more successful in front of the room if you develop a reputation for saying fresh things. Or even saying the same, familiar thing in a new and different way.

Of course, not everyone was impressed by the Oscar winner’s appearance or her speech. I saw comments on Facebook like “Francis McDormand looks like she’s on meth.” Talk show host Michael Medved tweeted, “it’s ludicrous to see the women of H’wood as an oppressed group of perennial victims.”

When you put your point of view out there, some will disagree. And some who disagree may mock you or insult you or slam you on social media.

On balance, though, polarizing is a plus.

Quick, who won the Oscar for Best Actor? If you had to think about it for a moment, you wouldn’t be the only one. Gary Oldman is a talented actor, he did a great job portraying Winston Churchill, and I couldn’t tell you a thing about his acceptance speech. I heard it, but it went in one ear and out the other.

Consider this. Google reports 15-million search results for “Best Actor 2018.” They list more than three times that many for “Best Actress 2018.”

The post-Oscars conversation is all about Frances McDormand, her natural look, and her call for female stars to insist on inclusion riders in their contracts. Those clauses set a requirement for diversity in front of the camera and behind it. They also penalize studios for falling short.

Yes, the whole idea of inclusion riders is controversial—and McDormand waded right into it without hesitation. What about you? How can you stake out a polarizing position when you’re speaking? Or does the very idea scare you?

Realize that you are more likely to attract raving fans when you’re willing to attract nay-sayers.

The spotlight is not a zero-sum game.

An Academy Awards acceptance speech is the winner’s chance to shine. To soak up the applause. For those few moments, the winner is the star.

What did Frances McDormand do? She invited every woman nominated for any award to stand up with her. For a moment, it seemed nobody quite knew how to respond. So she told Meryl Streep, “If you do it, everybody else will.”

Streep did and they did. Actors, producers, cinematographers, writers, composers, costume designers—a roomful of women standing and applauding for each other as McDormand said, “We all have stories to tell and projects we need financed.”

Did that diminish the accolades for McDormand? Not even a little bit. People have been talking about her including others in her big moment ever since then.

When you acknowledge fellow-speakers, refer to other parts of a program, or direct an audience’s attention to a colleague…you are not in any way minimized. To the contrary, the shared spotlight shines brighter.

So…do you have some things to say?

Now’s the time to start saying them. Let go of the need to fit in or play small or be like everyone else. Take Frances McDormand’s acceptance speech as inspiration, and get ready to step into the spotlight yourself.