The number-one question about speaking 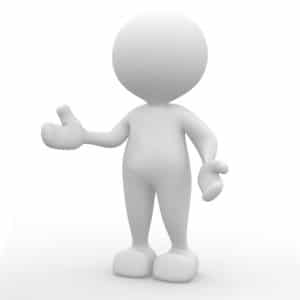 You may have the same question. I wasn’t surprised when it came up in a workshop last week; I hear it over and over again.

“What am I supposed to do with my hands?”

It’s funny that would-be speakers are flummoxed by those things dangling at the end of their arms. You know, the ones we use in every conversation to emphasize, elaborate, enumerate, and indicate just how big (or small) something was.

Some of us are more animated than others of course; our gestures are bigger, maybe more forceful or frequent. But almost everyone uses some gestures when they’re talking. It’s natural to convey additional information with your hands.

So when speakers ask me, “What should I do with my hands?” I say use them! And use them in a way that’s instinctive for you.

There are, however, a few gestures best removed from your repertoire.

You’ll be a more effective speaker when you use gestures well, and not only because they clarify or reinforce your message.

In a study of Ted talks focusing on the hands, Science of People found that gestures literally made a speaker more popular. A lot more popular.

They counted speakers’ gestures and viewers’ eyeballs. And the results were dramatic.

The least-watched TED talks garnered an average of 124,000 views. And the speakers used, on average, 272 hand gestures during their 18-minute talks.

To get comfortable using more gestures when you’re in front of an audience, start to notice what you naturally do with your hands.

Pay attention to others too—in formal presentations and ordinary, everyday conversations. What happens to their hands? And what impression do you pick up as a result?

You know how sometimes you’ll just get a “vibe” from someone? When we draw a conclusion that’s separate from—or even in opposition to—what they’re saying, it has to do with non-verbal cues. We’re reading the message their hands, for instance, convey.

If there’s a mismatch, believe their body over their words. And watch how your own physicality supports your message. But first, comment below to share your experience. What do you do with your hands?