Get Back On The Horse 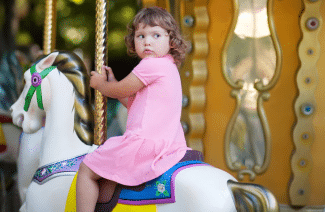 Ever tempted to just give up when something doesn’t turn out the way you’d hoped? It happens, right? You know your stuff, you’re good at what you do, and still … sometimes you don’t meet your own standards.

How do you handle that?

When I fall short, it’s easy to conclude I’m not cut out for whatever I just tried. And truth be told, there are a lot of things I can’t do because I wasn’t stellar at them on my first effort.

Measuring my own performance, I gave myself a big red “F.” I made up a story like “I’m not good at this” or “I guess I don’t have what it takes” or “I’ll never be able to do this the way [some expert] does.” And I gave up.

Maybe that sounds familiar to you? (I’m pretty sure I’m not the only one.)

I had a chance to study my impulse to toss in the towel. And I learned a few things.

I’d agreed to speak to an organization with two chapters—one on Monday night, the other on Tuesday. I was excited. I always encounter some delightful people in their meetings, I have expertise they value, and their reaction is always enthusiastic and then some.

Then Monday night rolled around and there I was with Audience Number One. It wouldn’t be rightto say I crashed and burned. It would be fair to say it was not my best gig.

Yes, they got some useful information. Yes, some of them had fun in the process. And…

The turnout was lower than expected. The energy in the room was off. People didn’t clamor to participate. There were snarky questions (“We’re not all radio personalities, you know …”) The first person to come up and talk to me afterwards complained about what I didn’t cover. I didn’t make the connections I usually make with people who hear me speak.

The whole thing just felt flat. And there’s no blaming an audience for that; it’s not their job to make a talk go well. That responsibility belongs to the person at the front of the room, in this case, me.

My first reaction as I headed home? Maybe I’m not a good fit for this group. I should never speak to this organization again. In fact, maybe I should give up speaking altogether … blahblahblah.

Well, I couldn’t quit right then even if I wanted to; I’d committed to be with their other chapter the very next night.

So what did I do instead?

I asked for feedback. The founder of the group knows me, he’s heard me speak many times, he thinks I’m terrific. He’s listened to enough speakers to have a good sense of what works and what doesn’t. And I could count on him to be candid but not mean.

We agreed that the content was useful but the energy was off. And that some people seemed surprised by the interaction—they may have preferred to just listen and not participate in any way.

I assessed my own performance. And I didn’t eviscerate myself. (That part’s important.) I took a good look at how things went and how I’d wanted them to go. I pondered how to bridge that gap.

I identified a change I needed to make. It was all in the set-up.

I’d ended with a story about my own experience confronting the same challenge the audience faced. I should have opened with that story. Ending on a light note is nice; it’s more important to build rapport at the beginning.

And I needed to set the stage for people to participate freely.

Then I got back on the horse.

Tuesday night was completely different. My talk started with the story and stage-setting. I let them know they’d have a chance to jump in. I acknowledged the vulnerability they might feel. And I got agreement from them that we’re supporting each other, not judging each other. We’re creating a safe space to speak up.

Funny how that changed everything.

There was big energy in the room and a sense of playfulness about what could be a very serious subject. People clamored to connect with me: asking for my newsletter, and later reaching out on social media, posting comments about how great it was.

Now that’s the way things are supposed to go. I was glad I’d ignore my impulse to declare myself a failure and give up.

There is no failure, there’s only feedback. Sometimes, when we don’t get the results we wanted, we feel that we’ve failed. We may even be inclined to give up.

Better to follow this NLP principle. Think of yourself failing at anything and you’re likely to get demoralized and quit. If you take it as feedback, you learn something, modify what you’ve been doing and keep trying. You’re likely to get a better outcome.

We’re almost always better off staying in the arena. Maybe you’re familiar with Theodore Roosevelt’s speech about the man in the arena.

Best-selling author Brené Brown says Daring Greatly was inspired by Roosevelt’s words and what they mean for all of us now. Then she wrote Rising Strong as a recipe for resilience, for getting back up when we’ve been knocked down.

Maybe somewhere along the line you tried something that didn’t work out. Your job evaporated. You lost the big game. Somebody else got the contract.

Did you get back on the horse? Or did you give up riding altogether?