Getting Ready For The Big Day 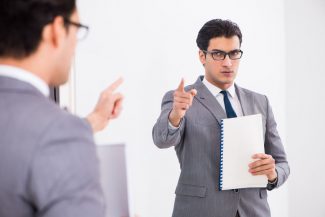 Imagine you have a major presentation coming up for an important client. Or a meeting where you hope to persuade the powers that be that your plan is the way to go. Or an interview for the job of your dreams.

The stakes are high. Every word counts. And it matters—a lot—how people perceive you.

How do you prepare?

There could hardly be higher stakes than in the upcoming presidential debates. Two men square off with the whole world watching, each of them intent on demonstrating why he should be in the Oval Office.

They couldn’t be more different in the way they’re approaching this.

Democrat Joe Biden has been preparing since early August. Meeting with his aides, reading briefing books, and studying his opponent.

He seems to be aware of several challenges, not least of which is the expectation that untrue things may be said. Biden has joked that he may have to be a fact-checker in real time, which isn’t an easy task.

And then there’s the tone of the whole thing to consider.

Having watched the president’s past debate performances, Biden told some Democratic donors, “I hope I don’t get baited into a brawl with this guy because that’s the only place he’s comfortable.”

The former vice president will likely be doing mock debates, practicing his comments about the issues likely to come up, and keeping his cool in the process.

His team has boiled the typical mountain of material down to a 30-page briefing book relying heavily on bullet points about debate-worthy issues.

Instead of formal meetings, he’s having casual conversations about those issues, often with whichever staffer is traveling with him. They say Trump doesn’t want to be told specifically what to say. He’s okay with some talking points but nothing scripted.

Team Trump has no debate rehearsal scheduled. So far at least, the Trump campaign is saying they won’t bring in somebody to play Joe Biden, the way Chris Christie served as a mock-Hillary Clinton last time around.

In fact, the president is telling people he’s been getting ready for this debate thing his whole life. Answering an opponent in real time, he says, “isn’t something you have to practice.”

On Fox & Friends, he said instead of scheduling rigorous rehearsals, “I sort of prepare every day, by just doing what I’m doing.”

Trump also seems to be banking on the notion that Biden will commit some kind of gaffe—it wouldn’t be the first time. And, the president’s even talked about trying to prompt Biden to stutter; some at the White House think that could backfire.

It should be said that people around both candidates have expressed doubts and worries about the way things are going. Some of them are confident their man will come out on top, but others have reservations. That’s the nature of high-stakes communication, right?

Anything can happen, judgements are made quickly, and it can be hard to recover once things go south.

Which makes it prudent to prepare.

When it comes to high stakes situations, I want to be like Biden. Carefully studying and paying attention to the details. Listening to the experts and learning from what they say. And practicing diligently.

I have to admit, though, most of the time, I’m more like Donald Trump. I sort of prepare every day, by just doing what I’m doing.

Then the big moment comes, and I fall back on a natural ability to command a room and connect with an audience. And on my willingness to show up as I really am. (Can you tell I’m trying to avoid the buzzword “authenticity?”)

Those are powerful assets, for sure. And it would still serve me well to prepare more thoroughly. To spend time crafting what I plan to say, massaging the words to make sure they’re as powerful as possible. And of course, rehearsing.

I’m not alone in my rehearsal-reluctance, am I? Maybe you have some of the same thoughts.

It’s partly that I want to be in-the-moment with listeners, making a real connection. Not trying to remember what I was supposed to say next.

It’s the engagement that’s satisfying when I’m talking with actual human beings. Going over my material all by myself doesn’t provide that.

Regardless, I am doing some rehearsal this week. And encouraging you to be, let’s call it “Bidenesque,” in preparing for your meetings and presentations and interviews.

I’m curious about your approach to preparation when the stakes are high.