Going To Work Where? 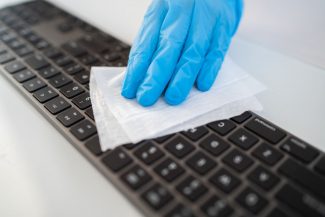 With all the talk about opening up again, there are still a lot of questions about where and how we’ll be doing our work. There does seem to be agreement on one thing: work is not going to look the way it did before COVID-19.

Used to be, on a typical weekday, 80% of the workforce was in an office somewhere. That’s down to about a quarter of us now, and it’s inching back up.

“Inching” is the operative word there. Maybe you saw the CBS Sunday Morning piece predicting a new future. They suggest as much as half of a company’s staff may continue to work at home.

What will the office look like for those who are there?

Sparse! There’s already way more space between desks than there used to be.

Open floor plans are on the way out. They won’t be missed much, will they? Getting rid of those widely mocked cubicles and opening things up was supposed to enhance collaboration. As it turned out, most people hated the lack of privacy. And the noise made it hard to concentrate.

Face-to-face communication among colleagues actually dropped when companies opened their spaces. One study put the decline at 72%.

So, desks are farther apart now. How else to make working-at-work safe?

Everybody from HR to Legal to that guy who used to sit next to you is weighing the risks and the benefits of going back into the office.

Almost makes you want to stay home, doesn’t it?

You might be able to do just that. A hybrid model is the next big thing at many firms. Some people will be in the office on any given day, some working remotely, some traveling, or calling on clients and dealing with their new pandemic policies.

It sounds like a reasonable way to keep the headcount down in office buildings and allow for physical distancing. There’s a pitfall, though, and it may well be women who fall into the pit.

An article in Harvard Business Review warns that given the vagaries of schools opening (or not) parents, and especially mothers, are the most likely to be in the office only occasionally or not all.

Out of sight, out of mind.

It’s not a formula for career success, that’s for sure. The work-at-home contingent can easily, and even unintentionally, be left out of the ad hoc, informal meetings that come up during the day. Those collaborative conversations often arise spontaneously, and they can shape the direction of a project, a quarterly plan, or a career.

The authors warn against “a new form of presenteeism.” They picture women still working at home, participating at a distance in formal team meetings, but left out of the unplanned, informal meetings that shape decisions. And passed over when plum assignments are handed out.

The HBR piece warns managers to guard against creating two tiers of employees, with more status and perks going to those who are physically present.

Some suggestions: Base decisions on data rather than assumptions. (Don’t just assume a mom needs to continue working at home; maybe her partner’s there and she’d happily come into the office.)

And examine the gender distribution in the newly thinned-out office to “ensure an equal amount of flexibility and ‘hybrid’ access for everyone.”

Maybe it’s on us?

This is a place where women can help each other be seen, heard, and respected. We should be doing that anyway, and many of us are.

The women in the Obama White House set a great example. They’d respond to being outnumbered and interrupted in meetings with what they called amplification.

When one woman came up with a good idea, another woman would repeat the notion giving credit to the woman whose idea it was. That made it harder for the men in the room to ignore the whole idea. Or to claim it as their own.

With some of us still working at home, it’ll be especially important for those who are physically present in the room to make sure our invisible colleagues don’t go unnoticed. Acknowledge them, address questions to them, pick up on what they say and continue the conversation.

It can be a communication challenge, regardless of gender, to hold meetings with some people in the room and some on the phone or Webex. It’s easy for presenters to overlook the colleagues they don’t see sitting right there in front of them.

It’s worth the effort to go out of your way to engage everyone.

If you’re already in the midst of shifting back-to-the-office, tell us how it’s going for you in a comment below.”