Let’s Shake on It 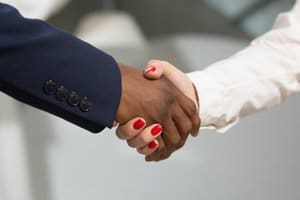 When I met this woman the other day I naturally extended my hand—so did she. But then she let her arm hang there, limp, with her hand in mine. Ewwwww.

You’ve been there, right? Of course some people go to the other extreme, squeezing your fingers in what seems to be some effort to assert dominance.

People pay a lot of attention to the way Donald Trump shakes hands, gripping hard and yanking the guy’s arm in toward him in a big alpha-man display. Body language expert Tonya Reiman calls it “the Trump Pump.”

And when he greets a woman? After the Trumps met the Macrons in France last week, some public affairs professor tweeted that the president tried to “rip off the arm of the French first lady.”

But other observers saw Brigitte Macron getting a gentler greeting than men receive. With a bit of confusion thrown in: should we hug or shake hands or what?

Trump seemed to settle on a sort of hug and an attempt at the classic French kiss-on-both-cheeks, with enough awkwardness that one smooch landed on lips instead. All of it, of course, with cameras rolling.

So what about you? Handshaking is a business basic…a fundamental social skill…you’ve been doing it for years now. But do you do it well?

The rules of engagement are culture-specific, for sure. Here’s the how-to for business situations in the United States.

There was a time, a lady learned to extend her hand and allow a gentleman to grasp her fingers only, as she just let her hand lie there. Today that’s known as a “limp rag” or a “cold fish” or any number of other unflattering things. Definitely in the DON’T category.

Usually it’s a man who overdoes the handclasp, so you wonder if you just made the acquaintance of a boa constrictor. But now and again, a woman who’s hoping to seem strong makes the same mistake. Better to be firm–but not to inflict pain.

Some people, you can’t seem to get away from. They have your hand in their grip and they’re not letting go. A handshake should last three to four seconds. Anything over five will make most people uncomfortable.

Politicians sometimes shake your hand and put their left hand on top of yours, or on your arm or shoulder. Most people, most of the time, will regard the two-handed handshake as intrusive, even phony.

Once in a while, it does feel right to increase the intimacy of the standard handshake by including your other hand, but use caution in a business setting.

Pulling someone in toward you as you shake their hand, as the president often does? It’s usually seen as manipulative. This is a time when staying at arm’s length is a good thing.

Shake or be Shaken?

When it comes to making the first move, there’s this advice: “The person in a higher position of authority or age should be the first one to extend a hand.”

But then on the other hand: “Business handshake protocol requires you to extend a hand of greeting to your superiors as you greet them.”

And don’t even get me started on the gender considerations, which have blurred considerably over the years.

My own feeling is that you can’t go wrong making the first, friendly move. Make it while facing the person straight-on.

And, you know how you feel when someone’s shaking your hand while gazing over your shoulder to see who they can meet next? Of course you never make someone else feel that way—you look them in the eye as you shake their hand.

Some germaphobes refuse to shake hands at all. The more casual among us don’t worry about it a bit. If you’re concerned about where those hands have been, take a tip from politicians who greet strangers all day long. Use a little hand-sanitizer when no one’s looking. And keep your hands away from your face.

It’s All in How You Handle It

Whether it’s a fear of germs, a sprained wrist, or just a preference, if you don’t want to shake someone’s hand, it doesn’t have to come off as a snub.

I once bounded out of my office to greet a client, enthusiastically extending my hand. He, it turned out, was an Orthodox rabbi. With rules against touching a woman, even in that innocent fashion.

He came right out and said, “I don’t shake.” And added, with a rueful shrug and a smile, “But I’m friendly.”

It was totally disarming. Far from being offended or put off, I was charmed and a (strictly business!) relationship was launched.

Follow the rabbi’s example and find a way to convey your pleasure in a meeting, with or without a handshake.