Hold Onto Your BUT 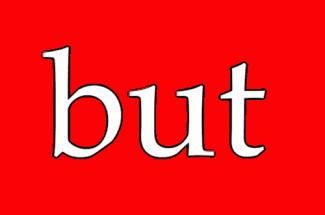 Or they might say: “You did a good job on the project but there’s room for improvement.” You hear: “It must not have been a very good job.” And exactly how are you supposed to improve anyway?

Then there’s the classic, “I love you, but I can’t be with you.” You hear somebody headed for the door.

The problem in every one of these sentences is the “BUT.” It might as well be a big fat eraser, the way it negates what came before it.

The encouragement, the compliment, the positive phrase—they’re wiped out by an immediate “but.” Which also tends to magnify the negativity that comes next.

Sometimes you hear the tone of “but” in a person’s voice before they utter the word, right? Now you’re already waiting for them to put a negative spin on whatever seemingly positive thing they just said.

This erasing-the-positive goes on all the time.

Start paying attention to your conversations, and I bet you’ll hear a lot of “buts” from colleagues, friends and family.

It’s likely you’ll hear yourself saying it too. When you do, notice how thoroughly a “but” between two phrases diminishes the first one and shines a spotlight on the second one.

Sometimes there is no positive.

There are people who don’t even begin by throwing you a bone. They start right out with “But …” in response to whatever you just said.

I was deep in conversation with friends about work and wanting to work and why we want to work—or don’t. Matters of opinion and feelings, in other words, not facts or data.

One of them jumped in, responding to what I’d said with, “But. But. But!”

You might guess, I bristled. I suggested, “And. And. And.” as another way to approach the conversation. That would allow for us to have divergent and equally valuable views.

My friend was having none of it. In this context, she insisted “But …” was exactly right. Because I was exactly wrong. Oy.

Any of this sounding familiar?

This is why we ought to hold the “but.”

When “but” is the connection between two thoughts, you can replace it with something else. “And,” for instance.

“And” – it’s also a simple, three-letter conjunction. It differs from “but” in suggesting that two assertions can co-exist and even have equal weight.

We can all learn something from the improv ensembles who use “Yes, and …” to build on each other’s lines and create comedy together, instead of dismissing what’s been said and starting a whole new bit.

“Yes, and …” isn’t just for comedians. Groups like ImprovTalk show corporate teams how to communicate, collaborate and innovate using improv exercises. “Yes, and …” is the jumping-off point.

Try it yourself, next time you find yourself with a different point of view. Something like this: “Yes, that makes sense. And, from my perspective …”

Sometimes I find myself connecting phrases that don’t really need to be connected.

Not only is the conjunction unnecessary, it can dilute the impact of what I’m saying. Leaving those phrases as two separate thoughts gives them more weight than either “but” or “and.”

“I enjoy my work, but I can’t wait for my vacation” suggests vacation’s a big deal, and I’ve given lip service to enjoying my work.

It could become “I enjoy my work, and I can’t wait for my vacation.” Better – both things are true. And, it still puts the emphasis on the upcoming break.

“I enjoy my work. I can’t wait for my vacation.” This one suggests that both parts are not just true—they’re equal. I love what I do for a living. This vacation is going to be terrific.

See what happens when you don’t string two thoughts together. Let each one stand on its own.

Sometimes we have to deliver an unwelcome message. Trying to soften it, we say something positive first, then deliver the “bad news.” We’ve already seen how poorly that works, much of the time.

Why? The positive-BUT-negative structure diminishes, or even erases, the opening phrase. Remember “You did a good job on the project but there’s room for improvement”?

What if you turn it around and use “but” intentionally to soften the negative instead? “There’s room for improvement … but you did a good job.”

That has a different feel, doesn’t it? Instead of “I suck” I get the feeling of, “Okay, I can get better, but then we can always get better. At least I’m doing well so far.”

“But” diminishes what comes before it and shines a spotlight on what follows it.

Consider, as you’re speaking or writing, where do you really want to shine that spotlight?

You’re busy, I know, and you likely have an observation or opinion about “but.”