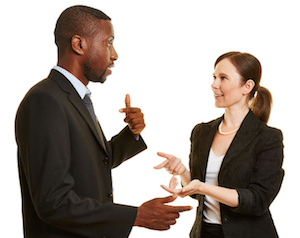 Doesn’t it drive you crazy when somebody interrupts you? Chances are, it happens a lot—in business meetings, conversations with friends, at the family dinner table.

It’s rude and disrespectful when they jump in and start talking before you’ve finished your thought. Or … maybe it’s a sign that they’re deeply engaged, interested in you and excited about the topic.

Turns out how interruptions are perceived depends on who’s being interrupted and even more so on who’s doing the interrupting.

Why does it matter? Assuming your business and your life involve conversations with other humans, the impression you make on those humans has an impact on your success, your relationships, and your happiness.

So let’s sort this out, with help from Stanford linguist Katherine Hilton. She’s studied 5,000 English speakers to nail down what shapes people’s perceptions of conversational interruptions. (I bet you won’t be surprised to hear that gender is one of those things.)

As Hilton points out, “We all have different opinions about how a good conversation is supposed to go.” Some people hear simultaneous, overlapping talk as an interruption. Some think of it as conversational cooperation.

In the Stanford study, participants listened to audio clips of scripted conversations. Then they answered questions about whether the speakers seemed to be friendly and engaged, listening to one another, or trying to interrupt.

A huge factor in their assessment was their own conversational style. Hilton says American English speakers fall into two camps: high intensity and low intensity speakers.

High intensity speakers are generally uncomfortable with moments of silence in conversation. They think talking at the same time is a sign of engagement.

On the other hand, low intensity speakers find simultaneous chatter to be rude. They much prefer that people take their turn and speak one-at-a-time in conversation.

The differences among us were especially stark when people were talking at the same time and staying on the same topic and agreeing with each other.

Low intensity speakers perceived any amount of simultaneous talk as an impolite interruption. They didn’t like it, no matter what the speakers were saying.

What can you do?

It’s smart to look at our own conversational style and ponder how that shapes the way we hear the people we talk with. You might also consider the other person’s style. If you naturally have different levels of intensity, you can put them at ease and head off misunderstandings by mirroring the way they talk.

Not that you’d want to imitate them exactly, but if you’re a big, fast, loud talker and you’re with someone who’s slower and softer-spoken, it will help to tone down a bit, and meet them in the middle. They’ll be less likely to think of you as a steamroller if you can come a little closer to their way of conversing.

About that gender issue …

When a woman asserts herself in a conversation with a man, is she leaning it? Or is she interrupting? Apparently, it depends on who’s listening.

Men evaluating the taped conversations were likely to describe women who jumped in while someone else was talking as ruder, less friendly, and less intelligent than men who interrupted. Even though the male and female interrupters were using the exact same scripts, the women were judged way more harshly.

Well, they were judged more harshly by men. Female listeners didn’t show any significant bias in favor or either the male or female speakers.

We know that women are penalized for being assertive in ways that men aren’t. So, Hilton wasn’t surprised to uncover this gender bias. She was surprised at the extent of it. And at the finding that interrupting changed the perception of a woman’s intelligence. Intelligence doesn’t seem to be related to interruptions.

What can you do?

If you’re a woman jumping into a conversation, be aware of this bias; any blowback you get may not be personal.

Consider your own conversational style; your tone and volume. Sometimes I need to interject—I want to do it in a light, measured way, with a smile, and maybe even a touch of humor. I’m more likely to get the outcome I want that way than jumping in with, “You’re completely wrong.”

Stand your ground, civilly, when they try to interrupt you. Allow that maybe they’re caught up in the conversation, excited rather than dismissing your point of view. You might say something like, “I’m not finished.” Or “Hold that thought until I finish mine.” Or “Give me a minute, then the floor is yours.”

If you’re a man reacting badly, give us a break already. Examine your perceptions of people in animated conversations; do you assume men are avidly engaged while you think of women as rude or unfriendly? (And please don’t tell me you think they’re unintelligent!)

Male or female, you may have been interrupted a time or two. How did you handle it? And what assumptions do you make about people who just can’t hold back until you finish your thought?