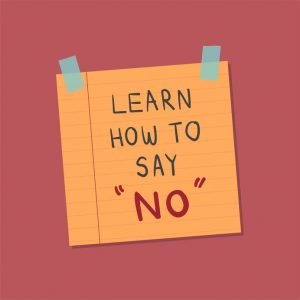 Maybe it’s easy for you. In which case, a lot of people would like to know your secret. Because for a lot of us, saying “No” is a huge challenge.

We can’t agree to everything—we only have so much time, energy, or money. And when you say “Yes” to one thing, you’re saying “No” to everything else.

Whether in our business or our personal life, inevitably, we prioritize possible ways to use our resources. And we decide, perhaps reluctantly, to turn down some requests, offers, or invitations.

End of discussion? Not exactly.

What’s so tough about N-O?

When it comes to saying “No,” degree of difficulty relates to a couple of things. How am I connected to the person who wants something from me? And, how up-close and personal is their request?

Say an organization I never heard of sends me a generic fundraising brochure in the mail. Easy to toss it in the trash without a second thought.

Then my next-door neighbor’s daughter rings my doorbell and asks me to buy wrapping paper/greeting cards/cookies. Her school/team/troop is raising money to keep the doors open. Will I turn down this earnest young lady? Not as likely.

I care about the kid, maybe the cause. And, it matters to me what she and her parents think about me. This is where saying “No” gets tricky. We’re loathe to disappoint people, especially people we care about. We don’t want to hurt their feelings.

And the biggest barrier to saying “No” is—we want them to like us.

We try to dodge disappointing people.

They don’t work anyway. No matter what you give as a reason for turning down their “ask,” it invites debate.

They could reasonably say something like: “I’ll wait while you get your calendar.” “We’ll postpone it until you can come.” “Bring your mother with you!”

Where does that leave you—making up another excuse?

A simple, unadulterated “no, thank you” is way more effective. It doesn’t open the door for their yeah-but response.

Then repeat, as necessary. No matter what they say, don’t come back with an excuse. Just stick with your initial response, slightly softened if you like.

You may have to say it a third time, even a fourth. Some people don’t easily take “No” for an answer. Stick with your no-excuses position. Adding something new just creates an opening for them to try talking you into a different decision.

Stay in your own map of the world.

So now you have a handle on what to say when you’re, um, declining an opportunity. How you say it makes a difference too.

Stay in touch with your physical space.

If you’re on the phone or talking face-to-face, sit up straight. Keep both feet flat on the floor and your seat squarely in the chair, with your spine erect, and your head straight up and down. This is known as Self Position.

In Self Position, I see, hear and feel from my own perspective. I know what I want, I can be assertive and clear about my limits.

By contrast, you’re in Other Position if you lean toward the person, curve your body, or tilt your head. That’s useful when you want to see things from their point of view. It undermines you, though, when you’re trying not to get sucked in to doing something you don’t want to do.

You may have some thoughts about how to say “No.” Or about that time you said “Yes” when you shouldn’t have.

Thanks to my one-time radio colleague Turi Ryder, author of the forthcoming book “She Said What?” Turi suggested an article about saying “no.” It’s always good to open the Request Line.