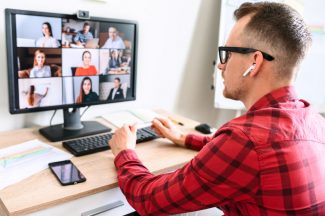 We’ve been talking about Zoom Fatigue for nearly a year now. You know, that sense of complete exhaustion we feel after a day of virtual meetings, webinars, and Zoom-based social gatherings.

In fact, I wrote about some of the science behind that sick-of-the-screen feeling way back when working from home was still a novelty for most of us. And it’s come up many times since then.

It makes sense that virtual work would wear us out. The screen is flat, the light is hard on our eyes, and we don’t blink nearly enough.

Many meetings are managed badly—or not at all. Much of the content is boring, or it doesn’t apply to us, or the whole thing just goes on longer than necessary.

It’s a given, at this point, that we’re all tired of gathering on Teams or Zoom or Webex.

Turns out it’s not just the platforms that are wearing us out. Nor the screens. Nor our less-than-sparkling meeting-mates.

Stanford University’s Virtual Human Interaction Lab has been studying the psychological effects of spending hours a day on virtual platforms.

Some of what they’re finding is about what you’d expect. But this, from Professor Jeremy Bailenson, surprised me.

Seeing yourself constantly on the screen is fatiguing.

“In the real world,” Bailenson says, “if somebody was following you around with a mirror constantly – so that while you were talking to people, making decisions, giving feedback, getting feedback – you were seeing yourself in a mirror, that would just be crazy.”

Bailenson says it’s typical to be critical of our own reflection. Some of us, more than others, can probably relate.

In any event, now that we’re seeing ourselves in one of those squares on the screen for much of our work day, it’s stressful. It’s taxing. The professor says there are negative emotional consequences to spending a lot of mirror time.

Which I discovered first hand over the past few weeks. And it didn’t have anything to do with virtual meetings.

We’re in the midst of a bathroom renovation at our house, which causes stress on its own, but that’s another story. It relates here however, so stay with me.

I noticed as this project unfolded that there were days when I felt unusually good. “Lighter,” is how I’d describe it. Not happier, exactly, but just in a better-than-average mood, for no apparent reason.

And then the reason occurred to me.

For several weeks, the downstairs bathroom, the one across the hall from my office, was usable albeit incomplete. The new toilet and sink had been installed. But it was not yet fully appointed. Specifically, it was missing a mirror.

That meant that once I put my make-up on in the morning, I didn’t look at myself again all day.

And there was a real freedom in that.

Not knowing if my hair was fully fluffed, or my make-up was still evident, or if my mood showed on my face…it turned out to be quite liberating.

That gave me something to ponder. And I considered pondering it with you. How does seeing our reflection influence our emotional state? Am I the only one who seems to benefit from not examining too closely what I look like today?

I set the question aside as potentially a little too navel-gazing for us.

And then I read this piece from Stanford.

Aha! There’s something to this after all. And it has real business implications, at least to the extent that we’re doing business on virtual platforms.

“Seeing yourself during video chats constantly in real-time is fatiguing.”

So, what can we do about it? It would be a mistake to turn off your camera during meetings. I tell my clients often, “If you don’t want to be overlooked, you must be willing to be seen.”

And indeed, there’s a value to meeting participants seeing one another. That’s what makes gathering on Zoom or Teams or Google Meet preferable to a plain old conference call.

Seeing you, however, doesn’t necessarily mean I have to see myself.

Professor Bailenson suggests that you make yourself invisible to yourself, once you’ve had a chance to see that your face is framed the way it should be.

On Zoom, you can click on the three dots in the upper right corner of your square; then click on “Hide self-view.” You’ll still see everyone else, but you won’t be there on the screen with them.

He actually recommends that the platforms change their default practice. They show video of each participant to that person and the others. Bailenson suggests that only the others really need to see us.

I think I’d miss keeping track of what my face is doing, and how much of my thoughts are evident on it. I’m going to give it a try though and see if it really does make Zoom meetings less fatiguing when I’m not seeing myself there in the squares.