What You Can Learn From Those Kids 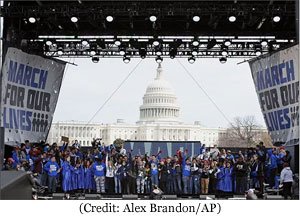 Maybe you’re in awe of the teenagers behind the March for Our Lives; you’re ready to follow their lead crusading for reasonable gun control.

Maybe you’re telling those kids—and the government—to keep their mitts off your Second Amendment rights.

Either way, there’s a lot to learn from the way young people took the stage and gave the world a piece of their mind.

The Pause is Powerful

One of the hardest things for most speakers to say is…nothing. You know how people refer to “an awkward pause?” In front of a group, it’s easy to feel that any pause is awkward.

Nervous speakers tend to talk quickly so each thought blends into the next. Or bridge the gaps with “um,” “uh,” “like,” “y’know,” “basically,” “effectively,” “‘kay?” or some other filler word.

I coach my clients to put a period at the end of a sentence and wait a beat before the next one. To use longer pauses for emphasis and understanding. And to know those brief quiet moments don’t drive people away—they actually pull the audience in.

Most find it challenging; even a short silence can make a speaker feel vulnerable.

Then there was Emma Gonzalez on stage at the Washington D.C. rally. She spoke for just under two minutes and after she named each victim of the Parkland school shooting, she paused.

The audience was surprisingly quiet. A tear rolled down Emma’s cheek. People began to chant…then stopped. Still, she said nothing. A woman came to the podium to see if she was okay. She certainly was. A timer beeped.

“Since the time that I came out here, it has been 6 minutes and 20 seconds,” Gonzalez said when she broke her silence. “The shooter has ceased shooting, and will soon abandon his rifle, blend in with the students as they escape, and walk free for an hour before arrest. Fight for your lives before it’s someone else’s job.”

And with that she walked off the stage.

Most of us will never stand silent on a stage for four minutes. But you’ll be an immeasurably better speaker when you use the power of the pause.

Make the Message Yours

Teenagers all over the country spoke passionately about mass shootings and school security and political action to protect them from these rampages.

Naomi Walder had her own take on the March for Our Lives. 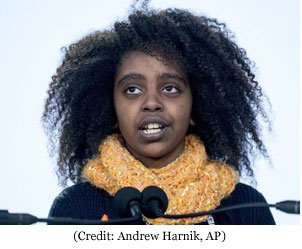 The fifth-grader from Alexandria, Virginia pointed out that all over the country, women of color are murdered at disproportionate rates. “For far too long, these names, these black girls and women, have been just numbers. I’m here to say ‘Never again,’ for those girls too.”

And Naomi got a big round of applause when she said she and her elementary school friends “know we have seven short years until we too have the right to vote.”

She’s younger than the other speakers and her focus was different from the rest. Naomi stood out partly because she didn’t echo everyone else. Rather than trying to sound like someone else, you’re always better off to be you in front of the room.

When there’s an Elephant in the Room, Pet It

You do enough speaking, sooner or later something will go wrong with an audience watching.

Technology fails. A server drops a tray full of glasses in the back of the room. Or maybe it’s you—you realize you just said or did something you wish you could take back.

Speakers sometimes try to ignore that sort of thing and plow ahead as if the snafu hadn’t happened. It’s never a good idea.

Better to deal with the reality. Believe me, everyone else noticed that elephant in the room. No need to dwell on it, but do acknowledge it. Make it part of the show—a light touch helps. And keep talking.

You might be surprised. Sometimes what seems like a disaster turns out to be a highlight. We worry that the audience will think less of us. Instead, they’re impressed when things go awry and we react with aplomb.

And if we’re lucky, none of us will run into anything as awkward as what happened to Sam Fuentes.

She was about two minutes into her speech. It may not be a coincidence that she was talking about “lawmakers and politicians” when she gagged, turned away from the mic, and vomited on the stage.

Can you imagine? Many an adult speaker would want to flee in embarrassment.

Sam straightened back up, laughed, and said, “I just threw up on international television. And it feels great.” Then she went right on with her speech.

Did the crowd think less of her? Not that you could tell. They were clapping and cheering and pumping their fists as she finished.

That’s pretty typical, in my experience. Just when you think things are going down the tubes, the audience rallies to your side and the misstep turns out to be a plus.

You may speak to promote a cause or to attract clients or to educate an audience. You’ll have much more impact on your audience if you pause often, own your message and pet that elephant.