Let your hair down? Maybe not. 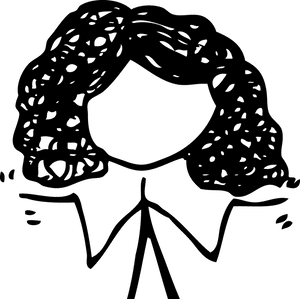 When it comes to a powerful presence, you can hardly beat being still.

Oh, of course you move. Your face, your hands, your whole body; action communicates too. And, the challenge most have is to stop the aimless, antsy movements. Fidgety gestures convey nervousness, discomfort, and sexual desire.

This came up in my conversation with a women’s group. Special category of “gestures to avoid”: twirling, flipping, and stroking our hair.

Think back to the Pilgrims and the Puritans. Young available maidens had long, lovely, flowing locks; they conveyed youth, fecundity, and…availability. Married women wore buns and bonnets to cover up that symbol of wanton sexuality.

Olden times, you say? Right now today, many Orthodox Jewish and Muslim women cover their hair when they’re in public; their tresses are only for their husbands to see.

Of course, there are a lot of good reasons to keep your hands out of your hair when you’re in a meeting, with a client, or in front of an audience.

Hair-play makes you look anxious. Psychologists say that stroking the hair (on the head, or for that matter, the face) is a self-calming behavior that people use unconsciously. It’s rarely to our advantage to announce our discomfort in a business situation.

Little girls play with their hair; it can be kind of cute. Little girls don’t belong in business meetings.

Messing with your hair is distracting. I’ve watched grown women sitting in meetings braiding their hair—it takes attention away from the brilliant observations they might make; we’re looking at their hair instead. And mentally dismissing whatever they might say.

So what about the sex angle? Hair is a secondary sex characteristic. Deborah Tannen, the authority on gender and communication, says, “Like breasts and a curvy shape, more hair is one of the features that appear during puberty, signaling sexual maturity. Enhancing and drawing attention to secondary sex characteristics can be a way of emphasizing sexual attractiveness.”

And then there’s this guy from the website Wingman. “When a woman feels attracted to a man she will often start playing with her hair, twisting it around her finger or combing her hand through it, and more often than not she won’t even know she’s doing it.

She might even occasionally toss her hair back or hook it behind her ear to reveal her neck. This is a slightly more overt move and is a definite signal that she’s sexually attracted to you.”

Those signals of sexual attraction don’t belong at the office where your colleagues and customers notice and interpret them at the non-conscious level. So, I told my audience, we do well to keep our hands out of our hair in business situations.

Which led to this question, from a woman who’d met with a job-search coach.

“I was told to put my hair up because I look too…sexy. I understand that hair could be a distraction – and you explained the symbolism of hair–but a change in style could make me feel that my image has changed and makes me a different person. What is your take on this?”

It wasn’t what she wanted to hear, but I had to tell her the coach’s instincts are right. Longer hair, bigger hair, fluffier hair – it all has a long cultural association with sexiness. (There’s a reason most men will tell you they prefer long hair on women.)

“I understand that your hairstyle is part of your image,” I wrote back, “and you feel that changing your image makes you a different person. I’d suggest a little wiggle room there.”

She should know that her image will definitely change over time, like it or not. If she’s like me, she WON’T like it. And if she’s wedded to a certain look, thinking that makes her who she is, she’ll have a tough time as those changes happen. (Ask anybody who’s counting crow’s-feet.)

Here’s a question for all women to consider. Do you want to stand out for your work or for your female-ness? (It’s okay with me, either way. But it’s something for you to think about.)

My guess is that job-search coaches raise this concern at least partly in response to #MeToo.

Men and women are more conscious these days of appearances and sexuality and relationships on the job. The Men+Women@Work equation is fraught. Think about Tony Robbins saying his friends are refusing to hire women because “Why ask for trouble?”

In the end, we’re all in charge of our own hair, but it’s smart to think these things through. And you don’t have to do anything drastic. If you’re not ready to march out and get a Jamie Lee Curtis cut, you could wear your hair up, or back in a low pony tail for a job interview or a big meeting.

(High pony-tail? Might be too little-girlish. And careful about the Messy Bun. It’s, well, messy. As in just rolled out of bed. As in…well, we’re back to that.)

One more suggestion. Setting aside the sex-connection, you’re still better off with your hair away from your face. But because in conversations, people want to see your face, especially your eyes. (We connect with those people eyes-to-eyes, heart-to-heart.)

Hair that hangs down right along the face can obscure your eyes, especially when you’re at a conference table where some people are looking at you from the right or left. That hip hair-do becomes a barrier that diminishes your impact.

Reaching for barrettes and bobby pins already? Committed to the Long Layered Look that’s on-trend right now? Or maybe you’re a guy who just got a glimpse of grooming issues you’re glad you don’t have to consider.