A Little Bit of Something 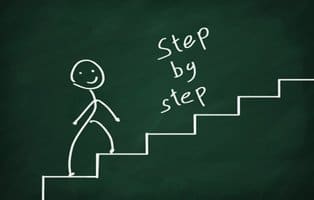 When it comes to creating change in your professional or personal life … it’s not that easy, is it?

I’m dead serious about shooting for a finished book by December.

And. I’m probably better off to commit to much smaller goals along the way. A chapter a week maybe? 5 pages a day? Or even 3?

It seems like it’ll take forever to get where we want to go if we settle for taking those baby steps along the way. However … check this out.

In her book Presence, Harvard Professor Amy Cuddy refers to those mini-commitments as self-nudges.

She gives us good evidence that the sweeping changes we often promise aren’t very likely to happen. You’ve made – and broken – many a New Year’s Resolution, right?

Why does that happen year after year? Cuddy says the resolutions are too ambitious and too sweeping. We can’t even imagine them, really. So it’s hard to make them happen. And they give us a lot of opportunities to miss the mark along the way. Criticize ourselves. Remind ourselves of all those other failures. And give up.

So she recommends self-nudges. They’re “minimal modifications intended to produce small psychological and behavioral improvements in the moment. They are tiny tweaks with the potential to, over time, lead to big changes.”

We’re often told, if we want to boost our business or our health or our tennis game, for cryin’ out loud … we should focus on the outcome we want. Make it vivid in our minds. And orient ourselves toward achieving that goal.

Cuddy cites research suggesting a bit-by-bit approach. She writes that nano-sized investments will give you medium-sized gains for three reasons. The small steps don’t require much psychological or physical commitment. They operate through physical shortcuts. And new behaviors can alter our attitudes.

So instead of aiming for a big result, we’re better off to focus on the process that will get us there … if we just keep putting one foot in front of the other. Nudging ourselves along, one step at a time.

This approach is in keeping with the popular Japanese business philosophy Kaizen, which promotes continuous, incremental improvements. It’s supposed to include everyone in an organization so that all those little changes add up to big growth throughout the company.

A lot of the big American firms have bought into Kaizen. Seems reasonable that it can work for us as small business owners and individuals too.

If you want to know more, check out this podcast. My friend Tom Rosenak from Diamond Mind Enterprises interviewed the author of One Small Step Can Change Your Life: The Kaizen Way.

Okay, maybe you’re still in the “Think Big” camp. You wouldn’t be the first person to pooh-pooh small, subtle changes. A lot of people believe passionately in those Big, Hairy, Audacious Goals. The way to accomplish anything, they’ll tell you, is to Go Big or Go Home.

But is it possible that the best way to “go big” is to start small?

Here’s something I learned from one of my hypnosis teachers, Patrick Porter. A little bit of something is better than a whole lot of nothing.

Which is to say, a little bit of something I will actually do beats some big shift I never quite get around to, all day long.

So now … what’s your plan for 2016, Part B? Post a comment and let us know where you want to be, come December. AND what are those self-nudges, those small steps that will get you there?