Many Things Are True 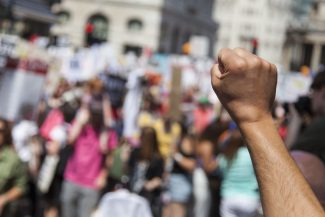 It’s hard to keep up with the fast-paced events happening all over the country, isn’t it? To say nothing of all the opinions we keep hearing from the experts and people with lived experience and our family and friends.

Just when I think I know what to think, there’s another bit of information, another video of some travesty, another point of view to consider.

Here’s what I keep coming back to, over and over again: Many things are true.

I first heard that phrase in a personal development workshop, oh, 30 years ago or more. It’s been a touchstone for me ever since.

Because I haven’t found anything more true than this: “Many things are true.”

In a highly charged environment like the one we’re in now, people are choosing up sides on all kinds of issues and many of them are demanding that we do the same. Are we with them or are we against them? Because, they make it clear, those are the only choices.

It’s all so binary.

It’s as if everyone needs a position that will fit neatly on a protest sign or a T-shirt or a face mask.

Nuance is lost. Exceptions are lost. Thoughtful analysis is lost. With those losses, what we have here is a failure to communicate.

And that’s even before somebody says, “Defund police.” Which, it turns out, doesn’t really mean we should take away all the money from all the police departments and leave citizens defenseless against crime and random emergencies. Or at least that’s not what most people mean when they say it. But then there might be those other people …

Oh, for the love of everything holy.

Can we please find better ways to articulate our observations and our experiences and our feelings?

People are using Zoom calls and social media and even some in-person meetings to explore what’s been going on all over the country. Sometimes that’s an admirable effort that can lead to understanding and even reconciliation.

Often, it’s trying to talk about complex and intense emotions with bumper-sticker language. It just doesn’t work, at least not if we want meaningful dialogue that will lead to changes worth making.

And there certainly are changes worth making right now. A lot of them.

I hope we can find our way to making those changes. We need time and patience to consider the possibilities, to create that kind of change.

I don’t think that will happen with sweeping pronouncements from—or about—politicians or police or the people in the streets. No matter which of them we’re talking about, many things are true.

I’d love to hear what’s true for you in a comment below.