Mike Pence has company – maybe you? 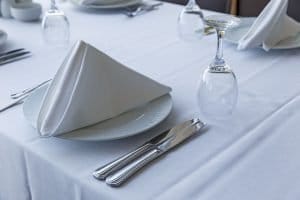 How much business are you doing away from the office? At a working lunch, maybe. In the clubhouse after 18 holes. Or over a half-caf something-or-other at your local Starbucks?

They all sound pretty innocuous, don’t they, no matter who’s at the table with you? Nothing untoward going on at the golf club for cryin’ out loud. Talking business over lunch or a cup of coffee seems harmless.

Do you draw the line when it comes to dinner?

Many people do. Vice President Mike Pence famously refuses to dine with a woman who’s not Karen Pence. He avoids any event where alcohol is served unless his wife is with him.

You think he’s a prude? Turns out the V.P. is not alone. Nearly half of men and more than half of women told researchers from Morning Consult it’s inappropriate to have dinner with someone of the other sex. And yet, a lot of people also said their careers depend on exactly that kind of after-hours conversation.

But wait, there’s more. This survey was taken before Harvey Weinstein and Charlie Rose and #MeToo. I’d guess even more people are concerned about where and how to spend time with colleagues now. They may well put the kibosh on dinner meetings.

What does it all mean?

She says men and women both need to learn how to have healthy working relationships with each other. Because if you won’t go out for dinner with a woman, it’s going to be tough to hire one as your campaign manager. Or as a senior executive. Or any other trusted adviser.

Male subordinates who can spend time alone with their bosses develop deeper relationships, Elsesser says, so when it comes time for promotions, it’s the men who get them.

That means this concern about private conversations between opposite-sex colleagues is just another way women are at a disadvantage when it comes to getting promoted, or getting hired, or getting the client.

In general, the men most likely to look askance at male and female colleagues having dinner were older rather than younger. And the older they are, the more disapproving they are. Millennials are more easy-going about this sort of thing.

Among both men and women, I-only-dine-with-my-spouse types are more likely to be Republicans than Democrats or Independents.

A higher percentage of folks in rural areas than in cities would avoid mixed-gender dinners with someone other than their husband or wife. And there’s a fly-over factor. Here in the Heartland, people are more likely to nix those meals than on either coast.

Education enters in too. The more schooling people have, the less likely they are to give thumbs down to a dinner meeting.

A relatively small percentage of atheists reject the idea of meeting over dinner. Fully a third of Evangelicals say no-dice to a dinner meeting with someone of the other sex.

They may be going overboard. Theologian Dennis Hollinger is an expert on sex and Christian ethics; he says the Bible doesn’t ban dinner with a colleague.

Hollinger told the New York Times it’s good to know one’s “ethical and spiritual vulnerabilities.” But he said, “The negative side is this can appear to treat women in really dehumanizing ways, almost as if they were a temptress.”

Men are more likely to think dinner with a woman is inappropriate as they get older. For women, it’s the other way around.

We’re less likely to avoid dining with a male colleague as we get older. That makes total sense to me, because part of the issue here is “What will people think?”

If you’re 33 and somebody sees you in a restaurant with your male boss, it’s reasonable to worry that they’ll assume hanky-panky. That could be bad for your career even their assumption is all wrong.

At my age, I can’t imagine anyone thinking I’m having a fling with that guy across the table. Which makes those business dinners more comfortable for late-career women.

And what about you?

You’re in, no matter what? Or, you’re part of the Pence posse—just say no to dining with the other sex. Post a comment below to tell us …

I’m having dinner with a friend tonight. A male friend. It’s mostly-business and I hadn’t considered it in any other light until I started reading all this research.

Since I have read it, I nixed someone’s suggestion that we go to Geja’s. Because right there on Google it says: “For over 50 years, fondue dining at Geja’s Café has been a perfect way to kindle romance…” Yikes!