So How Nasty Are You? 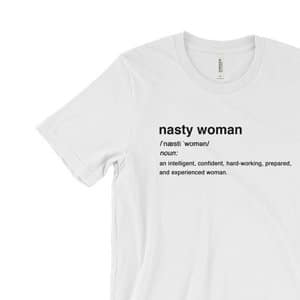 It’s fair to say females are fired up about this election.

Of course we’re not all “With Her.” But even some Hillary-haters are up in arms about egregious misogyny and sexual aggression. What are women reacting to?

There’s the usual patronizing punditry about Clinton’s voice and her smile. The incessant wardrobe analysis. Donald Trump lurking over her, getting in her space in Debate II. The infamous recording about what he grabs and when.

And then in last week’s debate, as Clinton described her plans for Social Security, Trump interjected, “Such a nasty woman.”

The reaction was intense. And immediate. On Twitter and Facebook, women embraced the label, proclaiming themselves Nasty Women. Many of the posts were hilarious.

Entrepreneurs flew into action creating Nasty Woman products. This definition T-shirt is one of my favorites; you can find it on Etsy.

The Nasty Women among us can choose mugs, throw pillows or hand towels. Necklaces and bracelets and key chains. There’s even a knock-off of the Trump campaign cap that says “Make America Nasty Again.”

There’s something big going on, though, as women of all ages speak up whether in support of Hillary Clinton or outrage about the way Clinton’s been treated by the pols and pundits. And of course, by her opponent.

That women-speaking-up has implications for the future, no matter who wins this election.

I think it’s wonderful, but my sentiment is not universally shared. The Trib ran a piece the other day slamming the “sexism is everywhere trope.” Columnist Heather Wilhelm added, “Here’s the thing. I’ve rarely faced sexism at all, and I don’t think I’m alone.”

Oh, Honey. If that’s true (and I have my doubts) it’s because your name is Heather.

By the time Heather and Amy and Jennifer and all the girls of the ‘70s came along, Mary and Linda and Debbie (and yes, Cathy or Kathy) had paved the way.

Here you are, Heather, with your wisenheimer opinion, your byline and photo in the Chicago Tribune. You’re too young to remember the many, many years when only Josephs and Michaels and Williams showed up there.

Too young to remember when the only women in the paper were Dear Abby and Mary Meade (the pen name for Tribune food editors until 1974).

It’s filed away right next to the memory of going to register for college classes. And the head of the Mass Communication department telling me – to my face! – “There’s no place for women in broadcasting.”

And the truth is, whether you are part of Heather’s generation or mine…or somewhere in between…you have memories of your own. You don’t need to hear a whole bunch of mine.

But that really is the point. I have a whole bunch of those moments in my history. We all have them. We filed them away. We got on with our work. And our lives. And we stopped making a fuss about things we really should fuss about.

Women—and the men who care about them—have let a lot of sexist crap slide for a long time now. And I mean everything from overt sexual aggression to hostile language to being ignored, insulted and patronized in meetings.

The presidential campaign has put it all front and center. With pundits sniping about Clinton’s lack of charisma–because the qualities they call charismatic are more male than female. With Donald Trump hovering behind his opponent on the debate stage, triggering outrage among women watching. With vulgar campaign paraphernalia calling Clinton every vile name you can think of.

It got our attention, didn’t it?

The question for you is: now that there’s this energy. Now that people are saying, “Enough is enough.” Now that Sisterhood is Powerful—again. Now what?

How can you capture that energy and make it work for you?

That might mean selling handcrafted Nasty Woman tchotchkes on Etsy. Or maybe there’s something else, something for the rest of us?

You know Lisa Kaplin and I offer workshops every so often for women who are ready to step up, stand out and be heard (next one’s December 2). I’m guessing this “nasty woman” thing might figure into our marketing this time around.

Therapists and other wellness professionals are talking about election-related stress; they stand ready to help you clear it away and feel calm and comfortable no matter what’s in the news.

Non-profits like the National Coalition Against Domestic Violence are riding the Nasty Woman wave to boost donations.

And people who offer corporate training on diversity and gender equality would be crazy not to capitalize on the discussion that’s happening now.

I don’t mean to leave men out of this discussion, by any means. How do you, too, harness the energy this campaign has generated? Can you use it to connect with your female customers or clients?

Tell us how this focus can boost your business. Or, if you’re just keeping your head down and waiting eagerly for the whole thing to be over, you can say that too!