Petting the Elephant … When it Sounds Like a Crying Baby 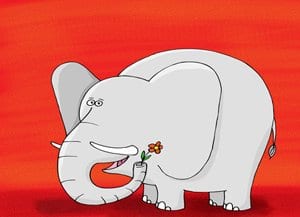 There are so many lessons from the campaign trail for speakers and marketers and networkers (which means – for all of us).

Unless you’ve been on a news fast, you heard about Donald Trump whipsawing a woman whose baby cried during his rally the other day.

My first thought: this would have been a perfect time for him to pet the elephant.

If you’ve heard me speak about speaking, you know that one of my rules is this. If there’s an elephant in the room, pet it.

Whatever goes on during your talk that’s unusual or out-of-line or even disruptive … that’s the thing people will remember, precisely because it’s out of the ordinary. And you want that memory to be a positive one.

As opposed to, say, remembering how you got derailed or got irritated or, as in this case, appeared to attack a tiny child.

Quick recap from the Trump rally in Virginia:

When a baby started to cry, the candidate reassured the mom, “I hear that baby crying. I like it. What a baby, what a beautiful baby. Don’t worry, don’t worry.”

But as Trump continued to talk and the baby kept on crying, he changed his mind:

“Actually I was only kidding,” he told the mother. “You can get the baby out of here.”

And then he told his troops, “I think she really believed me that I love having a baby crying while I’m speaking. That’s okay. People don’t understand. That’s okay,” he said.

The result: cartoons portraying Trump as a baby, op-ed pieces blasting him as a bully, and Republicans wondering why he’s going after some southern mother instead of his Democratic opponent.

What does this mean for you? Most of us aren’t likely to have a crying baby in the audience. But the more often you speak about your business, the more stuff can go wrong.

Technology fails, sometimes spectacularly. Somebody in the audience does something bizarre. A complete stranger makes a loud and unexpected entrance. There you are, in the middle of your talk, and suddenly there’s an elephant in the room.

It’s easy to get irritated when someone or something interrupts you. It’s also a mistake. Chances are the audience is mostly on your side. But you lose them if you lambaste the AV team or snap at the guy who had a sneezing fit or whine about that commotion in the hall.

The person at the front of the room is perceived as the person in power. If you criticize someone else, you risk coming off as a bully. And you move the audience to their side instead.

The impulse to ignore an interruption is also wrong. Everybody else noticed it – the speaker needs to notice it too. Not dwell on it, not wallow in it. But acknowledge it, make it part of the show, keep talking. There’s an elephant in the room; march right up to it and pet it.

When your audience is aware of something and you pretend it’s not happening, it creates a disconnect. It separates you from the people you’re talking to—and that’s the last thing you want.

You might guess, I’ve encountered an elephant or two.

Like the time I was in the middle of a talk. My audience: a group of speakers meeting at a Greektown restaurant. When a surly waiter waltzed in, pointed at the room next door, reached for my microphone and said—loudly—“You’re too loud.”

Right. That’s why they give speakers a microphone – so they can be loud.

I made an eyebrows-raised face that said, “This is kind of funny, isn’t it?” I got a laugh from the audience. I laid my microphone down on the nearest table. I stepped in closer to the listeners (we’re all in this together). And I kept talking.

The rude interruption became part of the show instead of derailing the show. And the plotline was “obnoxious waiter against our group” instead of “celebrity speaker picks on hapless server.” You see why that was the best outcome for me, right?

Funny. People actually asked me afterwards if I’d planned the whole thing in advance. Because the topic of my talk was: Petting the Elephant. How to keep rolling when stuff goes south.

Here’s what you can count on. The more often you speak, the more you’ll run into interruptions, inconveniences and intransigent listeners. (Or waiters.) Your mission: make them part of the show and keep talking. When there’s an elephant in the room – pet it.

Maybe you’ve petted an elephant or two yourself. Or maybe you saw that elephant stomp all over a speaker. Share a story …