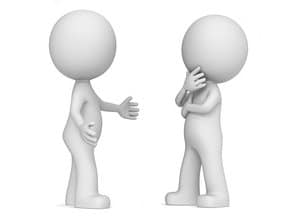 After what we’ve been through, it’s a question worth pondering.

I, in turn, asked that question when a friend was in the midst of marital disharmony. She was sure that her husband was wrong about, well, everything. And she really wanted him to admit it. I asked the obvious question. “Look, would you rather be right or would you rather be happy?”

Linda was dumbfounded. Her response: “You mean there’s a difference?”

You’ve been there, I’m sure. It’s the principle of the thing, right? The other person is so totally, completely wrong about whatever, you feel duty-bound to point out the error of their ways.

Because surely then they’ll come to their senses and see it your way. And if they can’t—or won’t—come around, well then maybe this relationship can’t be saved. If there’s one thing you know for sure it’s that you’re right.

Me? I’d rather be happy.

I have strong opinions, for sure. And you already know I’m not really shy about sharing them. Some people (I’m not naming any names) have a hard time with that. That’s their thing.

My thing is I’d rather preserve the relationship than bludgeon the other person with how misguided they are. Even in this fraught-with-emotion election season, I’ve tried to stay open to folks who are clearly on the wrong side. Which is to say, not my side.

I admit, I’m often puzzled about how they can possibly see things the way they do. I wonder if they hear the same speeches I hear. If they read the same articles. If they study the same issues. If they live in the same universe!

And even with all those questions, I haven’t severed relationships, as so many people have.

A few Facebook friends have expressed surprise—and a trace of annoyance—that they see comments on my timeline reflecting vehement disagreement. It’s true, some exchanges among my FB tribe have devolved into ugliness. I’ve even deleted a few that surpassed my limits for mean or vulgar or hateful.

But I haven’t unfriended anyone on Facebook, much less in real life.

I’ve explained, more than once, that I’m actually glad for the comments from people on the other side. They don’t feel as good as agreement does, of course. We all like to have our views validated. But the contrary comments have their own value.

Not because I think I can change their minds. Not much chance of that. But because it’s good to know the range of attitudes out there. And to ponder how (or whether) we can find common ground about anything.

You may see it differently. I know a lot of folks who’ve felt so strongly about this campaign that support for the other side was a deal-breaker for them. Unfriending doesn’t even begin to describe what’s gone on there.

So maybe you’ve cut off people who disagree with you (on Facebook or elsewhere). Or maybe, like me, you’ve tried to keep the connection in spite of your differences. The question is: where do we go from here?

How do we mend fences with family or friends or clients or colleagues who supported another candidate?

One woman told me very directly that being open about my opinions would hurt my business. People on her side wouldn’t want anything to do with a speaking coach on my side. I hope she’s wrong. I guess I’m about to find out.

For my part, I’m still on speaking terms with people who voted the way I didn’t. I’m looking forward to conversations that aren’t about candidates. And I’m still committed to going high.

I’d love to hear from you about how you plan to move on in your personal and professional relationships now that Election Day is behind us. Post a comment about rapprochement…or the people you’ve deleted once and for all.