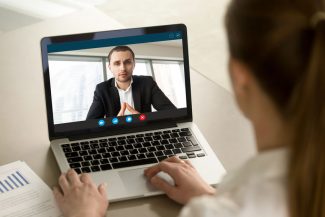 With all the remote work we’re doing now, it can be a challenge to develop rapport with a potential client or customer or even with colleagues.

When we all just log into Zoom or jump on a conference call and start talking, we miss an opportunity to lay the groundwork for a more productive relationship, to say nothing of a more valuable conversation.

How do we build rapport in these technology-assisted gatherings?

When we’re seeing each other in tiny squares on a screen, or maybe not at all, we have to go in a different direction to create common ground.

That means matching some elements of how they sound.

Subtlety is critical here; to get on your client’s wavelength without getting on their nerves, you’ll want to avoid a copy-cat approach. If your customer or colleague thinks you’re mocking them, it’ll ruin your chances of gaining unconscious rapport and even take you in the opposite direction.

There are several elements of vocal sound that you can match or maybe approximate.

If you’re out to create a connection with someone who speaks quickly and loudly, you’d speak more quickly and loudly than you otherwise might, to match them and establish rapport. Your voice need not be exactly equal on a decibel meter. But if they have a big booming voice, you speak a bit louder than you normally do.

If your conversational partner is speaking v-e-r-r-r-y s-l-o-o-o-w-l-y and you talk reallyreallyreallyfast, the mismatch is likely to make them feel that the two of you are not on the same page. So, you’ll adjust the rate at which you speak, coming closer to their natural pace.

Some of us really Punch out the words when we talk; we sound emphatic. We may even seem overly emphatic to those whose natural speech pattern is more restrained. People with an analytical communication style, in particular, tend to use less vocal variety, whereas very expressive individuals will have more shading in their voices.

So to the extent that you want rapport with someone whose voice is more or less expressive than yours, you may want to crank it up and put more energy into your speech … or rein it in a bit to match someone with a narrower bandwidth.

It’s not just tone of voice.

You can also match what the person says.

When you’re “speaking the same language,” they’re likely to be more comfortable with what you’re saying, more receptive to your suggestions.

Early in my radio career I answered a blind ad in Broadcasting Magazine. I had an interview with the news director – over the phone. And I soon found myself with a brand new job in Jackson, Mississippi.

I piled my belongings into my Chevrolet Vega (like I said, it was early in my career) and headed down I-55. After a lifetime in the Midwest, it was quite a change. I hadn’t been in the state more than an hour when the first person said to me, “You ain’t from around here, are ya?”

Of course, I adjusted.

Not too long after I settled into my new gig at WRBC (owned by the Rebel Broadcasting Company!) I was anchoring the afternoon news. And introducing the day’s big story.

The State Supreme Court had just handed down its ruling, I announced. “WRBC’s Stan Case is there … and we’re fixin’ to have a live report.”

It’s a good thing Stan started talking right away because I couldn’t have said another word. I shocked myself into silence when “fixin’ to” came out of my mouth … on the air!

It’s a perfect example of the way we mirror other people’s speech patterns, often without conscious intent.

As I acclimated to my new home, I naturally picked up Miss’ippi-isms. You hear the same thing among groups of friends. Or colleagues. Certain words or phrases become part of their tribal language.

And because that’s a natural phenomenon when people are in rapport, we can be intentional about saying it their way to signal that we’re all on the same team.

When you want a person to feel at ease with you, try using some of their own words.

Not synonyms or words that are kind of close to what they said. But use the exact language they use. And notice what happens when you’re on the same wavelength.

Post a comment below to tell us in your own words what happens when they see what you say, hear what you mean and grasp your point.