Speaking Lessons from the Conventions 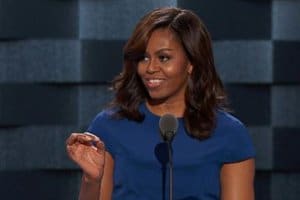 Some who took the stage in Cleveland or Philadelphia were just so-so. Then there was Michelle Obama who knocked it out of the park. Even people who disagree with her politics conceded that her Monday night speech was mesmerizing.

Donald Trump’s kids all did well last week, though they’re not professional orators and don’t have the depth of experience that some other convention speakers have had.

I was struck by Eric repeating the phrase “My father is running for you” as he named categories of voters who are in a world of hurt. It really drove the point home; repetition is a smart rhetorical device and he delivered the line well.

Some of Trump’s supporters worried that he’d fall flat using a teleprompter to give a prepared speech. His gift is casual, off-the-cuff talk. You may have noticed that he dropped in some of his typical phrases like “Believe me, buh-lieve me.” Those asides carried us along and made the speech flow better than if he’d just read one scripted sentence at a time. 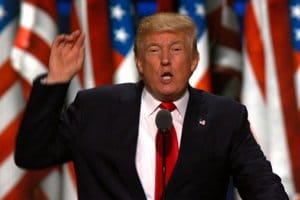 The word that kept coming up in the analysis of Trump’s speech was “dark” and I heard “dystopian” flying around too. It made sense for him to paint a bleak picture of our current situation. If American life were a day at the beach, why would we vote for him?

And Trump’s delivery matched the words he was saying; that’s enormously important for a speaker. When listeners sense incongruity, the speaker’s credibility plummets.

The Democrats, of course, opened their convention with a rosier world view. Senator Cory Booker’s positive energy was contagious. He too used repetition with the line, “America – we will rise.”

Elizabeth Warren is a good speaker and often a humorous one; being funny or clever is a huge advantage in connecting with an audience. But the First Lady was a tough act to follow, wasn’t she? Michelle Obama’s speech was so powerful, there was a palpable drop in energy when Warren took the podium. 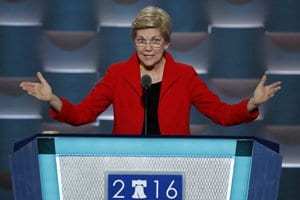 That’s a trick bag for a speaker. And I’ve faced the opposite, but equally challenging, situation. A previous speaker sucked the energy out of the room and then I had to bring it back.

So how does a speaker convey energy? It’s all in how they look and how they sound.

Speakers who stand tall, move with purpose and use gestures well give us a sense of command; we feel their power. (And even as I write that, I’m mindful that some speakers can be overpowering. That’s not the goal.)

A rich, full voice will make all the difference when it comes to projecting energy. But that doesn’t necessarily mean you need a big, booming bass voice. (For instance, maybe you’re a woman.) Here are some ways to speak with more charisma, regardless of your vocal range.

Slow down already. For most of us, our pitch rises with our pace. So take it easy … slow yourself down and let your voice be more settled.

Give it a rest. People who pause while they’re speaking convey confidence and command. That might mean pausing for a beat at the end of a sentence … or even between phrases, where there would be a comma if you were writing instead of speaking.

And while you’re pausing, breathe. You’ll look – and feel! – more comfortable if you breathe all the way into your belly. Your voice will be more fully supported. And don’t be a mouth-breather. You’ll want to inhale and exhale through your nose, to avoid sounding tense and breathless. (It’s better for you anyway – your nose is designed to filter the air you take in.)

Put a period on it. You hear people often? talking about something they’re supposed to know about? their business, for example? And saying everything as if it’s a question instead of a statement?

If you’re one of those people, that vocal question mark is undermining your credibility. And you need to stop it. Really.

If you want to sound more confident and in-charge, lower your intonation at the end of a sentence. Or even at those mid-sentence pauses … just to let your strong presence sink in.

Let us hear you smile. We don’t just see the smile on your face; it comes across in your voice too. And it conveys warmth and friendliness and likability. Some people find it helps to have a mirror near their desk, as a reminder to smile when they answer the phone.

The wrap-up. Maybe you’re looking for buy-in on a project at work. Or a new job. Or you need more customers or clients to make your business more profitable. You will have more influence when you incorporate these suggestions and speak with more charisma.

As always, I’d love to hear from you. Share your observations about convention speakers … or your own experience.