A Snafu while you’re speaking. Now what? 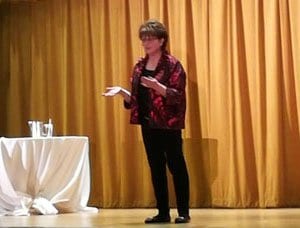 What do you do when you’re presenting, pitching, giving a speech, and the unexpected happens?

I found myself in exactly that situation. It turned out well. And it’s a good example to share with you.

I had just begun my talk at a professional association meeting. It was a late night. They’d been in that room for hours. And they’d listened to a bunch of updates and award-giving and blueprints for the coming year.

That put some pressure on me to liven things up. Interaction almost always helps…so I invited questions and comments from the get-go.

What I had in mind, of course, was questions and comments about the issue at hand: speaking with authority.

Instead, I’d barely started talking when a guy waved a mic-runner over, stood up, and told me, “I like your jacket. Where did you get it? And how much did it cost?”

That could be a show-stopper. I quickly decided it wasn’t going to stop mine. I’ll tell you what I did. Then, why it worked and how you can do the same to avoid being derailed.

But…they have a sample sale every couple of months. Right there in Oak Park where they do the designing and cutting and sewing. And the prices are unbelievable. You can call them and get on their mailing list, so you’ll know about the next one.

Or just reach out to me later…and I’ll put you in touch.”

You’re not likely to get comments on your wardrobe during a business presentation. But things can go south, right? Technology fails. You forget something and have to backtrack. Someone pipes up with an unwelcome comment or tries to take you off on a tangent.

Here’s what you can learn from my experience.

That pause also builds expectation. I could see the audience leaning in, paying attention. The thought balloons over their heads said, “How’s she going to respond to that?” In that moment, 230-odd people were completely with me.

I kept it short though. The message: I’m open, willing to answer your questions. But you’re not diverting me from my agenda. (Did I mention?—this is my show.)

Now, when it’s your show, you can do the same things.

Pause. Don’t feel pressured to rush into a response to whatever’s gone wrong. And breathe.

Change positions. You’re using your body as an anchor. This spot, where you’ve been speaking, is associated with your authority and expertise. So when you step into another role…you also literally step into another place.

The movement is a visual cue to help your audience stay with you. And it preserves your ability to go back to being the expert after you’ve dealt with the distraction.

Depending on the room, you could walk ten steps away or two steps away. In a conference room, you might shift from standing to sitting or perching on the edge of a chair. You’re looking for something that breaks the “presentation state” and sets a different tone.

Be you. Because people will sense it in an instant if you put on a mask. Generally, when something goes wrong while you’re speaking, people are pulling for you to work it out. They’re on your side. They want you to succeed. But you blow that good will if you get phony.

But be nice. I know, “nice” is a namby-pamby word. What I mean is this. Some speakers, comedians, radio personalities have become famous being rude to their audiences. For the rest of us? Best to be positive.

Even if you think someone’s intentionally throwing a wrench into your work, it doesn’t serve you well to get into it right then. You might be furious that the projector went out again. Now’s not the time to blast your tech people. Or you feel like an idiot for skipping that important point. Stay light about it, weave it in, and get back on track without a lot of self-criticism.

Remember whose show it is. Yours. Whatever happens, deal with it, move through it, and make it part of that show. You may be surprised at the impact those moments can create.

Question to ask or a story to tell? Share in the comments below.