Dive in With a Splash: How to Start Your Speech 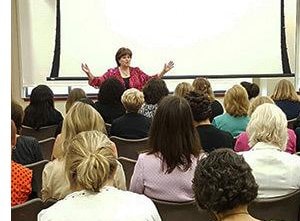 Picture yourself at the front of the room, ready to share your expertise. The audience is eager to hear what you have to say. Here’s the thing. How do you begin?

The other day I heard a speaker start out by repeating everything the meeting host had just said when she introduced him. He literally went over the exact same information we’d just heard, wasting a precious opportunity to grab our attention. If you go to many meetings or conferences, you hear that kind of thing a lot, don’t you?

What makes for a strong opening? Here are some possibilities.

I sometimes begin a talk about how to introduce yourself at a networking event by saying, “Nobody cares who you are or what you do. Until you give them a reason to care.” The first part of that is an attention-getter. It can rub people the wrong way until I say they’re about to discover how to give people that reason to care.

If all the marketing gurus are telling people to hammer away on social media, and you say it’s not worth the time and effort? You have a powerful way to open a talk.

Say a celebrity couple just split up and you’re speaking about how to have a long, happy marriage … that tidbit from the news is a perfect launch pad for you.

I sometimes recommend that my clients phrase their question as a statement. Here’s what I mean by that. Often when someone asks a question in a prepared talk it sounds phony and scripted and not at all like a genuine request for information. The way to get around that is to begin with something like, “I wonder if …” or “It could be that …”

You can explore the question then, but in a more natural-sounding way.

For instance: “Abraham Lincoln said, ‘Most folks are about as happy as they make up their minds to be.’” (Unless you’re going to take issue with it. If you’re ready to say, “Honest Abe was lying about that one,” you have a provocative opening.)

A funny anecdote, however, is a great way to start a talk. Self-effacing humor can work well, especially for speakers who have a lot of personal power. If it’s used badly, though, it can come off as a lack of confidence and that won’t do you any good.

You could equally well ask people to picture something unwelcome. “Imagine yourself 20 or 30 years from now. You’re long-since retired, your savings are dwindling, and that Social Security Check doesn’t go very far.” Then, of course, you offer them the keys to avoid that unpleasant scenario.

One last thing that you can weave into any of these openings. I’m a big believer in the word “you” as an attention-getter and an attention-keeper.

When you launch your talk by making it about your audience. Their problems. Their goals. You’ll find they’re much more interested in what you have to say.

Maybe you’ve discovered a magical way to begin a talk. Or maybe you’ve heard a really lame launch. Share your observations in the comments below.