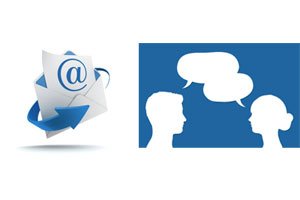 Of course the easiest way to ask is in an email. You dash off your request; it lands in their inbox immediately. And voilà – they write back and say yes.

Turns out you’re a lot more likely to get the answer you hope for if you ask ‘em face-to-face. And apparently, most people don’t get that.

Harvard Business Review cites a Cornell University study: People tend to overestimate how persuasive they are in text-based communication. They also underestimate their power of persuasion in person.

The research set up a please-fill-out-this-survey request and two groups to make the ask. The people who would ask in an email predicted about half of the folks would say yes. The ask-in-person group also expected a yes from about half the people who got their request.

In fact, it turned out that face-to-face requests were 34 times more effective than emailed ones.

How could these people be so wrong?

It seems they’re looking at the interaction from their own point of view instead of the putting themselves in the other person’s shoes.

If you know you’re a trustworthy person making a legitimate request when you hit SEND, you might not expect the recipient to see … a suspicious email containing a dubious link. But that’s exactly how it looks to the person who reads your message.

Funny, isn’t it, how they see things differently than you do?

If you’ve ever heard me speak about communication, you know this is a recurring theme for me: in any medium, the more we look at things from our listeners’ or readers’ perspective, the more successful we will be.

There’s one other element to the disconnect between people’s assumptions about their persuasiveness and the actual results they got when they tried to persuade someone.

That element would be … your face.

As the Cornell researchers said, “we found the nonverbal cues requesters conveyed during a face-to-face interaction made all the difference in how people viewed the legitimacy of their requests, but requesters were oblivious to this fact.”

This doesn’t surprise me at all. Tons of research points to the enormous importance of body language. Our words can easily be undermined by vocal tone, facial expression or the way we use our hands in a conversation.

Here’s the truth of it: if what you’re saying and what they’re seeing don’t match, you’ll have a persuasion problem. People will believe what they see you doing instead of what they hear you saying.

Bottom line, if you do a lot of your business communication via email (and who doesn’t?) you might give some thought to changing the mix, especially when you have a request to make. A quick text or email is convenient. And it’s comfortable. But it may be making you less effective than if you shifted to in-person interactions.

Typing less and talking more would likely increase your influence.

I hope your wheels are turning about your own communication. Post a comment below about switching it up and what that could mean for your business.