Tell Me a Story … 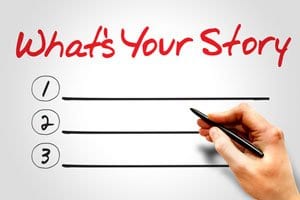 You probably first asked to hear a story about the time you began putting words together to make simple sentences. Little kids love stories. And it turns out, adults do too.

I heard you could even get Siri to tell you a story. First time I tried it, she told me, “It was a dark and stormy night … no, that’s not it.”

Eventually, I did get a story out of her. About a virtual galaxy far away and an intelligent young agent named Siri wondering why people asked such funny questions.

You can check it out for yourself. If you thank Siri for the story, she’ll tell you, “Just doing my job.”

She’s not the only one whose job is to tell us a story. It’s your job, too.

Story-telling has gotten a lot of attention among business experts the past few years, and for good reason. Whether you’re out to get funded, sell a product or promote a cause, telling a good story will get you there way faster than dumping data on your listeners.

It’s not an accident that brilliant, successful business leaders practice their pitches for hours before they get in front of an audience. A compelling story well-told will get them to their goal faster than anything else.

Turns out we’re wired for stories. Research is coming out all the time that tells us exactly how important story-telling is.

A Princeton neuroscientist used brain scans to demonstrate story-power. Uri Hasson measured the brain activity of the person telling a real-life, it-happened-to-me story about her high school prom, of all things. He also scanned the brains of people listening to her tale.

What did the MRIs reveal? Surprisingly similar patterns of brain activity in the story-teller and the listeners. In the world of neuroscience that’s called “speaker-listener neural coupling.” Hasson said neural coupling is widespread and extensive.

What does that mean for us?

If you want to make a point … or a sale … the best thing you can do is illustrate with a story.

You might be thinking that you don’t have any stories, or your experiences aren’t compelling enough. I promise you, there are things happening in your world every day that can become the stories you tell in a speech or a conference or a simple conversation.

To become a better story-teller, you just have to notice them.

I’ve started writing things down, just the ordinary stuff that happens all the time that maybe doesn’t seem that significant in the moment.

Because that ordinary stuff in my life – and yours – becomes the way we influence, educate and inspire an audience.

When I was a talk-show host I used to say, “Life is show-prep.” That’s not actually a bad way to look at things even when we’re not preparing for a radio show.

Tell us how you use stories in your work or your search for work. Or just tell us a story. Maybe we’ll discover some virtual neural-coupling.