Whether you were shopping – or selling – or not the past few days, odds are you were expressing your thanks for something. It was refreshing seeing some of the political rants on Facebook replaced by gratitude posts.

One thing I’m thankful for is how the title of my book rolls right off my tongue. “Show Up and Shine,” I say over and over, “Simple Steps to Boost Your Confidence and Charisma.”

I might have been able to write it, but I’d never be able to say it without Mrs. Clark. Mrs. Clark was my grade school speech teacher. I don’t mean a public speaking teacher … she was the speech therapist who helped me overcome a lisp and lateralizing.

You may not know the word lateralizing – but you know the sound. It’s when somebody says SH’s or CH’s or J’s and the sound is all mushy and wet. It’s because they’re pushing air out the side of their mouth instead of sending the air stream out the front where it belongs.

Week after week, I left my classroom and went to my session with Mrs. Clark for endless talk of Sammy the Snake and “She sells sea shells at the seashore.” And repeating my last name … with the dreaded “J” sound AND an S at the end.

And week after week, I remained confused. In my own head, my version of “She sells sea shells …” sounded just like everyone else’s. 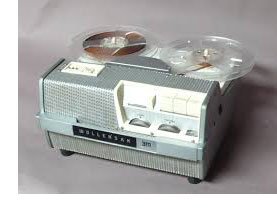 And then one day, maybe 4th Grade-ish, Mrs. Clark set up one of those you-have-to-be-a-certain-age-to-remember-them Wollensak reel-to-reel tape recorders. For the first time, I heard my voice from outside my head … the same way I heard everybody else’s. And it was clear as a bell that my version of “She sells sea shells …” wasn’t quite right.

It wasn’t long before I learned to push the air out the front of my mouth instead of the sides. And I finally got my tongue out of the way so Thammy the Thnake became Sammy the Snake. I didn’t need speech classes anymore. And I kind of missed Mrs. Clark.

Fast forward by 16, 17 years. There I was, four years into my career. On the radio. When I was working at WERE in Cleveland they had me do a commercial for – get this – the She Shop. The tagline on the spot, repeated half a dozen times in 30 seconds: “She shops at She.”

Next time I came home to visit the folks in Glenview I called the school district office. I figured Mrs. Clark was retired if she was still even alive – after all she was OLD when I was in grade school. (Or she seemed old, anyway. Looking back, she was probably all of 40.)

But I hoped maybe they could pass on a letter to her, or something. I just wanted her to know how thankful I was that I could actually say “she shops at She,” that I had this career in radio, that I made a living with my voice in a way that I never could have if she hadn’t worked her magic years ago.

I couldn’t have been more surprised when the woman on the phone said, “She’s at Lyon School today – I’ll connect you.” And the next thing I knew, I was talking … clearly and confidently … to Mrs. Clark.

I was so happy to have a chance to say thank you.

There’s a post script to the story. It wasn’t long after that phone call that I landed a job in Chicago. You know who started listening to the WLS morning show – she even wrote me a “fan letter.” Mrs. Clark.

Comment below to tell us about the teacher … or someone else … you’re grateful for.

Are We Tired of Technology Yet?

Are People The Problem?

How To Tell Them What You Think

A Tiny Drop of Nice