To Thank Your Audience—or Not 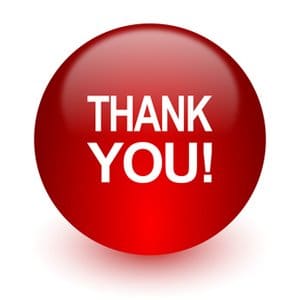 You’re hearing a lot about gratitude this week. Emails from realtors and financial advisors and your plumber—all of them thanking you. Or suggesting that you thank others. ‘Tis the season, after all.

When you get down to it, showing our appreciation, in any season, is almost never a bad thing. Almost never.

It turns out there is some controversy over whether speakers should thank their audience.

Who could be against thankyous? Well, the people who run TED talks, for openers. You’ll see a few high profile TED speakers who ended by thanking their audience. But only a few.

They don’t open with thanks either, or with a greeting to the audience. If your mission is to communicate an idea worth spreading, you don’t waste precious seconds on pro forma verbiage.

Toastmasters famously advises against thanking listeners for their attention. The suggestion is that the audience should thank you for the valuable information you’re sharing with them.

Plenty of other experts agree. They call the opening “thank you” a missed opportunity to have real impact. Those first few words set the tone for your entire talk. They capture your listeners’ attention—or not. “Thank you” is not a powerful way to begin.

And in this corner, Brian Tracy—one of the most successful speakers around. He offers 15 ways to start a speech. And number one is: Thank the Organizers and Audience.

“You can start by thanking the audience for coming and thanking the organization for inviting you to speak,” Tracy recommends. “This compliments them, makes them feel proud and happy about your presence, and connects you to the audience like an electrical plug in a socket.”

Tracy has plenty of company in the “remember the magic word” camp. Other speakers suggest that you bond with your audience by thanking them early. Or leave them feeling positive about you by saying “thank you” at the end of your talk. Which also, conveniently, lets them know you’re finished.

I say if you have to let them know you’re finished, you were finished a long time ago.

And it takes way more than an opening “thank you” to create that electrical-plug-in-a-socket effect.

So, should you work an expression of gratitude into your talk? My answer is a resounding “It depends.”

There are a lot of good ways to open a talk. And “thank you” is not on the list. I’m with the people who believe you’re better off to start with something more powerful that grabs your audience’s attention.

I’d never waste that opening moment with “housekeeping” or comments about the weather or how great it is to be here. Or “thank you.”

Thanking the audience for being here, or for their attention, seems pretty weak.

I do often thank people for their participation. My programs are usually interactive; people don’t just sit and listen. They might experiment with their physicality and their voice. Or they try out a different way of using gestures. Or they play with a new way to talk about their work.

That kind of active participation can feel risky. I genuinely appreciate it when listeners take that risk and I usually tell them so.

But not at the very beginning of my talk. And not at the end, either.

I prefer to close with the one big point I hope my audience will take with them. Or something specific they can do to integrate what they’ve learned and put it into practice. Or inspiration to make the changes we’ve talked about and get results.

So my suggestion for most speakers is: If you choose to thank your audience, do it close to, but not right at the end of your talk. Do it in a natural, conversational way. Then continue speaking…and finish with a flourish.

You may have some experience with this audience-thanking, or not thanking. Share what you’ve discovered in the comments below.