That Mother-What? The Lowdown on Language 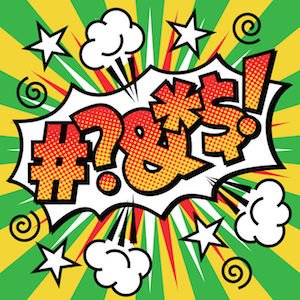 You’ve heard the Congressional caterwauling about that Michigan congresswoman’s call to impeach Donald Trump. She didn’t use his name, referring to him instead in the most vulgar of terms.

Republicans are shocked, shocked(!) that any official would talk like that. You’d think they’d be used to it—they’ve listened to the president himself at rallies and debates and White House meetings. That guy frequently uses language that is, let’s say, unrefined.

Of course, some are defending Rep. Rashida Tlaib. Her fellow D.C. new-comer, Alexandria Ocasio-Cortez, pointed to Republicans excusing the president’s “locker-room talk” and called their criticism of Tlaib “hypocrisy at its finest.” She added, “GOP lost entitlement to policing women’s behavior a long time ago.”

Gender is undeniably a factor here. As is age, or generation. And, there’s the question of context. They all apply not just to elected officials but to you and me too.

When it comes to business, where do you draw the language line?

My seventh-grade science teacher scolded me. “Shame on you! A nice girl like you, swearing like a truck-driver.” I couldn’t tell you now what I’d said; “hell” maybe. I’d certainly never dropped an F-bomb—I’m not sure I even knew the word at that age. (Mrs. Hanson was right. I was a nice girl.)

How about this, from the famously foul-mouthed Richard Nixon: “But you show me a girl that swears, and I’ll show you an awful unattractive person…I mean, all femininity is gone.”

Old notions about sex and swearing linger. Even now, people rate a speaker using expletives as dynamic and attractive, if they think it’s a man. If a woman’s name is attached to the same words, she’s labeled weak and repulsive.

So, it’s not surprising that people defend the president and other rough-talking men, even as they excoriate Rashida Tlaib.

Some women insist the only way to change things is to use verboten language with abandon. If wearing away age-old prejudice against salty words from women is our only concern, they might be right.

If, on the other hand, we care what colleagues or clients think of us, it behooves us to consider their feelings when we choose our words. It may not serve us well to take a stand for swearing when some stuffy someone is evaluating us and making decisions that impact our career.

Your grandma would likely disapprove of obscenities, no matter whose mouth they come out of, with a bigger tsk-tsk if there’s lipstick on that mouth.

Younger people are generally more tolerant of coarse language. The work management firm Wrike did a survey: Barely half of Baby Boomers admitted to swearing at work while 66% of millennials let it fly.

While her congressional cohort defended Tlaib, House Speaker Nancy Pelosi acknowledged a “generational reaction” to the vulgarity. “I don’t like that language,” she said. “I wouldn’t use that language, but I wouldn’t establish any language standards for my colleagues.”

As for those of us who don’t work on Capitol Hill, it makes sense to consider who you’re talking to. The older they are, the less likely that they’ll cotton to cussing.

If their reaction to you is important … say, if they’re deciding whether to buy from you … it’s worth keeping your words squarely in their comfort zone.

Some of Rep. Tlaib’s defenders point out that she wasn’t at a Congressional hearing when she crudely insulted the president. She was talking to friends and supporters. In a bar, for cryin’ out loud. It’s a setting where the word she used is hardly shocking.

But the reality is this: Now that she’s a public official, she carries that context with her, no matter where she is. Voters, political opponents, the media…they’ll all be judging what she says and does everywhere.

She didn’t back down a bit when her label for the president went public. But if I were her political adviser, I’d tell her a little of that goes a long way. She’d be smart to find other ways to convey her contempt for Trump next time

I’m picturing my pals laughing as I take a stand for temperate language. Mrs. Hanson didn’t dissuade me—I’ve been known to drop a dirty word or two.

However, what I say in casual conversation with friends differs from my business language. While I’m all for authenticity, my vocabulary on stage doesn’t include some words I might use with a like-minded—or like-mouthed—girlfriend. (You know who you are.)

We’d all do well to make that kind of distinction and it’s not that hard to do. It’s true, I’ve had a lot of practice. Radio provided years of experience cleaning it up when the On-Air light went on.

You might imagine a red light in your office—a signal to switch to more restrained language. Not because you’re a people-pleaser or “a nice girl” but because it’s in your best interest to create a powerful professional presence. And you don’t need an expletive to do it.

Or maybe you think you do need those expletives? Post a comment below to take a stand on swearing in business. And you can use any language you want when you do.