The Candidate, The Columnist, and The Critics 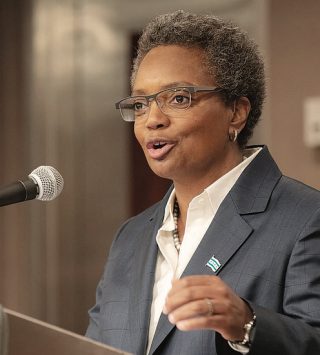 Maybe you love talking to groups; maybe you’d rather be in the audience. I say speaking is a skill we all need. Certainly, when somebody wants our vote, they should be able to tell us why they deserve it.

They don’t have to be gifted orators, but they shouldn’t be fumbling and stumbling through a speech either. At a minimum, they should speak clearly and concisely, with bonus points for some charisma.

In Chicago, two women are competing in a run-off election for mayor, both of them African-American. This is precedent-setting in a city known for racial polarization; a lot of us are excited about it.

Some of us are disappointed in the way these candidates communicate.

Chicago Tribune columnist Eric Zorn has criticized their speaking skills. In particular, he wrote about the way they dilute their messages with excess verbiage and filler words.

Lori Lightfoot’s favorite filler seems to be “frankly.” In the interest of balance, Zorn also pointed to Toni Preckwinkle’s overuse of “y’know.”

I am right there with him, but then you know where I stand when it comes to filler language.

Some people think it’s too picky to expect clear communication from a candidate. Zorn stirred up a hornet’s nest with a Facebook comment about a debate and the 29…or was it 32…times Lightfoot said “frankly.”

Some people agreed that a mayoral candidate should be smoother.

And, this being Chicago, there was the racial angle.

“Don’t pretend there aren’t additional problems when you go after a black woman for how she speaks. Also, it’s petty…everyone (and yes, it seems to be all white people here) piling on this woman saying her “message is diluted” or she doesn’t sound “smart” when she over-uses a word. I think this pettiness and language policing is ugly. Especially considering the history of white people language-shaming black people.”

Whew! Can we take a step back?

We’re all judged by the way we communicate. All the time. And certainly, when it comes to our leaders, their speaking style is fair game.

How they express themselves is one way we evaluate their ideas, their ability to promote those ideas, and the chances they’ll persuade others to work with them on our behalf.

People set up this false dichotomy between style and substance, insisting that only “substance” matters. In fact, communication skills are absolutely germane when it comes to assessing a public official. They’re not separate from substance. They’re part of the person’s substance.

That goes for all of us.

I’m disappointed to see Lightfoot supporters default to “you’re picking on her because she’s black.”

Really? I say it’s patronizing to suggest that an African-American candidate, or a Latinx candidate, or a woman for that matter should get a pass when it comes to communication. Or any other aspect of campaigning.

Yes, we should avoid race- or gender-based bashing. It is offensive. Opponents said horrendous things about Barack Obama (and Michelle!). Some of them are still using slurs to describe the president who left office more than two years ago.

And of course, the current occupant of the office is famous for calling women “ugly,” “horse-faced,” and “Miss Piggy.” Never mind his remark “blood coming out of her wherever.”

That kind of criticism really is petty and ugly.

But when it comes to positions on issues, or political alliances, or to the ability to express oneself, it’s fair to hold every candidate to the same high standard. We judge a politician by all those criteria and more. It’s insulting to lower our expectations because of race, ethnicity, or gender.

Maybe you’re with the people who call it nit-picking to consider a candidate’s speaking ability. Or maybe you favor those who communicate well.

Talking about how public officials express themselves, I can’t resist quoting the Mayors Daley, both known for tripping over their tongues.

And his son? Richard M. Daley’s malapropisms were regular fodder in the City Hall Press Room. One of my favorites—his response to media scrutiny.

“Scrutiny? What else do you want? Do you want to take my shorts? Give me a break. How much scrutiny do you want to have? You go scrutinize yourself! I get scrootened every day, don’t worry, from each and every one of you. It doesn’t bother me.”