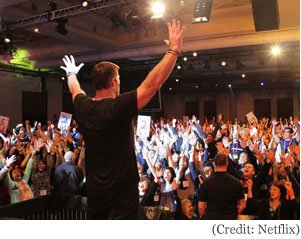 “I’m not gonna be inauthentic and say I’m sorry about something I’m not sorry about.”
– Tony Robbins on March 15.

“I apologize for suggesting anything other than my profound admiration for the #MeToo movement.”
– Tony Robbins on April 8

Well, he changed his tune, didn’t he? If you haven’t followed the whole drama involving the fabulously successful self-help guru, here’s a quick recap. (And here’s the video if you want to watch it for yourself.)

At one of his gigantic Unleash the Power Within events, a woman suggested that Robbins misunderstood #MeToo. He’d been on stage praising Las Vegas casino bigwig Steve Wynn. And accusing women of playing the victim to feel significant when they call out men like Wynn who’ve harassed or abused or assaulted them.

Nanine McCool suggested there might be more to #MeToo than women wanting attention, and boy did she get a response!

Robbins argued with her. He patronized her. He towered over her (he’s about a foot taller than she is). He insisted she do some exercise where he pushed her down an aisle. And while he bullied her, he demanded that his thousands of fans affirm him. (“Raise your hand if you heard me!”)

To her credit, McCool didn’t crumble. She was remarkably good-humored about the whole exchange. She stood her ground, defending the women who’ve spoken out about sexual abuse and harassment.

There was a smattering of comment on social media right after the event. But the uproar began in earnest when NowThisNews ran a clip of the video showing Robbins accusing women of “using a drug called significance to make yourself feel good.”

The video also captured his story about a “very famous, very powerful man” who’d interviewed three people for a job.

“One was a woman, two were men,” Robbins said. “The woman was better qualified, but she was very attractive, and he knew, ‘I can’t have her around because it’s too big of a risk.’ And he hired somebody else. I’ve had a dozen men tell me this.”

Really? The guy’s afraid he’d be overcome by the irresistible urge to harass or abuse an attractive woman? Or he thinks the men who work for him couldn’t keep their hands to themselves? What is the “risk” exactly?

Tony Robbins didn’t explain that. But he sure did unleash the power.

“Me Too” founder Tarana Burke called the whole episode “deplorable.” She suggested on Twitter that Robbins talk to more SURVIVORS and less sexist businessmen.”

The Time’s Up collective tweeted, “Hey @tonyrobbins, are you serious? Well you also said, ‘The path to success is to take massive determined action.’ Don’t worry, we’re on it.”

Hollywood got into the online act. Alyssa Milano tweeted, “Wow, @tonyrobbins. This is appalling. And just gross. Good luck trying to recover from this.”

Robbins got the message, I guess. He posted an apology (or someone posted it for him) on Facebook. The comments that followed his post are enlightening, some are disturbing. A boatload of men—and some women—defended him and flattered him. Apparently they got private responses thanking them for their support.

The comments sections on YouTube are more freewheeling that Facebook’s. They’re full of vulgarity and threats, directed toward Nanine McCool and other women.

Most of the negativity is from men who are outraged that anyone would question their right to use women however they want to. Some are from Robbins’ groupies, furious that anyone dare disagree with him about anything. This whole episode brought out the ugly in a lot of people.

McCool herself seems to be taking the whole thing in stride. She’s on YouTube saying Robbins will learn and grow if he really talks to these women.

“I still think he can do it,” McCool said, “And I still think he’s worth talking to because he does have people who believe in him and follow him and listen to him, and he can have a tremendous impact. So, Tony Robbins, I’m rooting for you. I think a lot of other people are rooting for you as well.”

Maybe you’re rooting for him too, pleased by the possibility that he’s been “woke.” Or you may be among the disillusioned. Post a comment below to share your observations.