Turning the world upside down 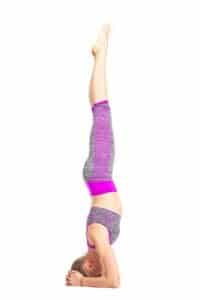 You know how it is. You want to try something new. Do something different in your business, or maybe in your life.

But you already know it’s too difficult, or too scary or it’s just not the sort of thing people like you do.

That’s how I felt about yoga’s inversion poses. I mostly loved yoga, but the headstand made me feel like the klutzy little girl I was in gym classes years ago. (If you missed that hilarity, catch up with last week’s article here.)

Nothing changed until I met Steve the Marine, and no, “Marine” is not a metaphor for a steely kind of guy. Steve is literally the only yoga teacher I’ve encountered who is also a Marine. His active duty days are over, but he’d be the first to tell you a Marine is always a Marine.

Steve gives cues in class like “lower your legs slowly to the deck.” And he’s not mean, exactly, but he definitely pushes his students.

He pushed me. Sometimes by actually putting his big, meaty hands on my sweaty shoulders or my hips or wherever and giving me an almost-gentle shove. And sometimes by offering “encouragement.” In a drill-sergeant sort of way.

One Thursday night, Steve was obviously over my struggle with the headstand.

He brushed off my too-old-too-fat-not-enough-upper-body-strength-not-enough-core-strength routine.

Well. This was an interesting way to look at it. It’s clear that I can’t control my feet. But I ought to be able to do something about my head, don’t you think?

So that night, when I got home, I sat down and closed my eyes and imagined myself upside down. Pictured it in rich detail, as if I were standing across the room watching myself practice a headstand.

In my mind’s eye, I saw myself clasping my hands on my purple mat, putting the crown of my head down in that little nest, walking my feet up from behind me, straightening my back, and lifting my legs up into the air.

Then I imagined what it would feel like to do a headstand. I concentrated on the sensation of my hands and arms on the mat – the slight stickiness, the subtle waffle pattern. My fingers woven together, except for the pinkies, leaving them uncrossed so they don’t get squished.

I felt my head nestled into my hands, concentrated on my bare feet walking up behind me and the effort in my core as my legs went up in the air. Enjoyed the feeling of triumph as I imagined myself straight, vertical, and upside down.

On Monday night, I went to Steve’s yoga class. I put my forearms down on the mat, clasped my hands except for the pinkies, put the crown of my head down with my fingers around the back of my head, walked my feet up, straightened my back, and lifted my legs up into the air.

Yes. I did a headstand.

Okay, it was not the most graceful headstand ever done – but it was a headstand. Right there in the middle of the room, because Steve says practicing headstands against the wall is for sissies.

So I began doing a headstand every chance I got. Yoga teachers would say, “Inversion pose – your choice.” Immediately, I’d put my forearms on the floor, make that nest with my fingers … well, you know the rest. And get this – it was graceful. And powerful.

Yoga teachers, and even my fellow students, would actually comment on my headstand practice regularly. “You’re so strong,” they’d say. Or, “Your headstand is beautiful.” Or, “I wish I could do a headstand like yours.”

Now the truth is, I know what they really meant. They’re too polite to come right out and say, “I can’t believe somebody who looks like you can do a headstand like that!” I don’t care. Doesn’t bother me one bit.

It delights me that I can do a headstand. It thrills me that I managed to get my head out of my way. I’m on hiatus from yoga classes these days, pending a new knee. But I’ve been known to do a headstand in my office – just because I can.

And because I discovered that an excellent way to change your point of view … is to look at the whole world upside down.

Now … think about your work for a moment. How are things are going for you right now? What would happen if you turned it upside down? Post a comment below to share your new perspective.