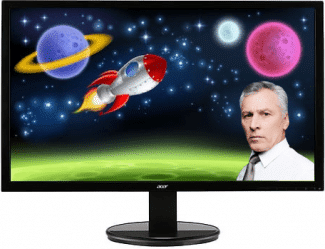 Now that we’ve moved all our meetings from offices and conference rooms to our laptops, there are still some things to think about.

A big one is the backdrop for your meetings.

The people on Zoom with you are looking at more than your face during those virtual meetings. Everything about you sends a message. And so does everything around you.

Fortunately, most of us aren’t likely to wind up as fodder for twitter’s Room Rater.

We’ve scrambled to make our living rooms, home offices and kitchen tables presentable for our meetings with colleagues or customers. Yes, we can assume that our meeting-mates notice that poster on the wall behind us. The family photos. And the books on our shelves.

There’s more pressure, though, for the pundits, politicians, and celebrities we watch on TV.

You can tell it’s been a stretch for some of them, moving out of the studio where they had multiple cameras, perfect lighting, and a make-up artist to doll them up before they went live.

Now they’re at home in their den, talking to their iPad, with the whole world watching.

And that whole world includes the Room Rater, one Claude Taylor, who’s taking careful (and public) note of their surroundings. And literally giving them a rating, 1 to 10, in his tweets.

Most of those assessed take it with a grain of salt and a sense of humor. Some have disputed their rating, while others spruce up their backdrop and ask for a re-do.

Should you create a fake “set” for your video meetings?

Some people (among the famous and the rest of us) have tried to avoid putting their personal space out there to be seen—and judged.

The big advantage of that is that people see you in the setting of your choice. On a beach, in a garden, or in a professionally designed and impeccably decorated faux office.

To me, that turns out to be a disadvantage. The fake backgrounds are just that – fake. I’d so much rather see you in your own office or home, and I’m willing to be seen in mine. I kind of like the glimpses we’re getting of each other in these video meetings. Seeing each other as real people.

A totally different take on your Zoomroom …

Maybe you’re familiar with Feng Shui, the ancient Chinese approach to creating balance, harmony and energy flow in our surroundings?

Feng Shui consultant Marianne Kaplan has some suggestions for setting up your space so it’s just right for your video meetings.

There’s a lot to think about, isn’t there, when you set up your virtual meeting space. Whether you’re Zooming with colleagues or clients…or interviewing with a potential new employer… its worth giving some thought to the impression they’ll get from everything they see on that screen.

Maybe you’re ready to set up a waterfall in your office? Or you might think the only thing that really counts is the words coming out of your mouth.