The word you can’t stand 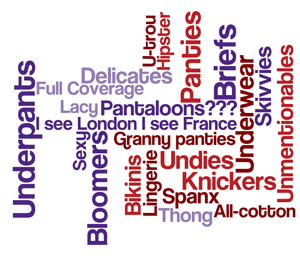 Is it the sound of the word? The meaning? Or is it some association with an experience you had or a person who said it? What is it about that word that sets your teeth on edge?

Seems like everybody has a word that gets on their last nerve—and that points to a pitfall in our efforts to communicate with each other.

I don’t know what your can’t-stand-it word is; for a lot of women, “panties” is the word that gets on their last nerve.

It was exciting to find myself quoted in the Chicago Tribune the other day. Answer Angel Ellen responds to questions about clothing and cosmetics and shopping; readers sometimes contribute advice.

My note to writer Ellen Warren actually said, “Three words: Soma Vanishing Edge. Well, there are really four words, but the fourth one is ‘panties’ so I’ll skip that.” The Answer Angel is on record as loathing the word “panties.”

She has plenty of company! But then, what are we supposed to call them instead?

A few observations from my friends:

My totally unscientific poll of Facebook friends found some people aren’t that crazy about calling them underpants, either.

Peggy said, “I hate the word underpants. I use underwear instead.” Trisha doesn’t mind it, but she said, “Underpants sounds like what you wore in Girl Scouts or at camp.” On the other hand, Bam is all for it. “Underpants,” she said, “for under pants.”

The vast majority of people with a preference use “underwear” to refer to what goes under pants. Or a skirt. Or anything else. Underwear outpolled every other label by far.

But boy, do some people get creative!

We got a lot of votes for Spanx. But then there was Lynn, who referred to them as her “sausage casing.” And Cindy called them “a torture device.”

A few people went right to “thong” to refer to what’s underneath. A few others (me included) reacted to that idea with a big “Ewwwww.”

Valerie says it’s enough to say “underwear,” or even “panties.” She doesn’t want to know about the specifics.

Some people get very specific. Like Rebecca: “Granny panties- before when I was married. Delicates- in dating life!”

Some are cute. Sue: “Our very young granddaughter would say—underwears.” And Kurt said he refers to them all as “superfluous.”

Some go for classy. Or at least French. Molly referred to the entire category as sous–vêtements. And Tom calls ‘em culottes. I think of culottes as a split-skirt sort of thing. But there it is in Wikipedia: “The French word culotte is (a pair of) panties…”

The British word is “knickers”—I heard from a few Anglophones.

And Nancy made some fine distinctions. “I tend toward panties when I mean filmy, fancy, lacy things. Cotton, full coverage?? Underwear or underpants. Can’t believe I’m writing this down!! I’m blushing!”

One thing stood out: the men leaned toward old-fashioned language for ladies’ well, whatever-you-call-them. ”Unmentionables.” “Delicates.” Guys were even using words like “drawers,” “bloomers,” and (get this) “pantaloons.” I’m not sure if they were yanking my chain or if discomfort drives them to dated lingo.

What it all drove home, though, was this. Words have meaning to each of us that goes way beyond what the dictionary says.

No wonder we so often have trouble communicating. We assume a shared understanding, as if everybody speaks our language. But in truth, your words have layers of meaning that may be very different from mine.

This is worth pondering when you’re writing—or speaking. What connotation do you give a word or phrase? What import does it have for someone else? And how can we possibly find common ground?

We differ so vastly on the label for lingerie—imagine the chasms between us when the subject is “justice.” Or “progress.” Or “diversity.” Or any other abstract concept.

The map really is NOT the territory. Alford Korzybski wrote that in Science and Sanity in 1933. We’d best keep the distinction top-of-mind now, when so many of our conversations are fraught with misunderstanding, distrust, and division.

Otherwise, we’ll constantly have our panties in a bunch. Our knickers in a knot. Our undies in a bundle.

You have some thoughts about the way we use words? As always, share your words below.