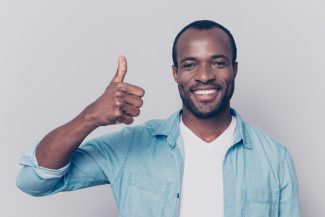 How do you know you can trust a person? A lot of folks will tell you they decide to believe in someone based on what they do rather than what they say.

It’s pretty good advice, even when the person hasn’t said anything yet.

Our initial assessment of trustworthiness is based mainly on non-verbal cues, which makes sense when you think about it. Humans learned to read each other before they ever developed speech.

And that’s useful now, when we’re so often seeing each other in a square on a screen.

So, what do you see that tells you, “I can trust this individual?” And … what should you do to make it more likely that a new acquaintance will trust you?

When an individual looks us right in the eye during a conversation, even a short one, and when they seem comfortable maintaining that visual connection, we assume they’re being straightforward.

The opposite is true too. We get suspicious when we’re talking to someone who looks at their shoes, or off to the side, or over the top of our head. Or maybe you’ve run into a person who closes their eyes or blinks unusually fast and often, blocking eye contact. Those habits, too, make it harder to develop trust.

Eye contact presents a special challenge when we’re meeting virtually. You’ll need to look through the camera to create that kind of connection with the others. If you look at their faces on the screen instead, their perception will be that you’re looking away from them. That will diminish their sense that they can trust you.

People want to see your hands.

You know what the lawmen in those old Westerns used to say: “Keep your hands where I can see ‘em!”

That’s good advice if you want to build trust. Putting your hands in your pockets or behind your back diminishes credibility.

Think about the language; we might refer to a sneaky move as “underhanded.”

In fact, are you familiar with the lore about the handshake’s origin? They say the ritual greeting evolved in ancient times as a way to demonstrate to an opponent—or an ally—”my right hand is empty. I don’t have a weapon.”

Of course, then there was that shake, just to make sure nothing’s hidden up a sleeve.

Even when you’re seated at a table, you want your hands visible. Again, the language is revealing. “Aboveboard” means straightforward or honest. And has, since the 1600s when keeping the hands above the table or board was meant to discourage cheating at cards.

In a virtual meeting, your hands may be below the camera’s view much of the time. It’s worth bringing them up occasionally so your meeting-mates can see them. And gesture with enough oomph that people see the movement in your shoulders and upper arms even if your hands aren’t in the picture.

We wonder about someone who fidgets a lot. He seems uneasy; does he really mean what he’s saying? In particular, to be seen as credible, you’ll want to keep your hands off your face and hair.

This becomes especially important now on virtual platforms when the whole focus is on your face and shoulders. I’ve seen a bunch of hair-flipping, cheek-tapping, and chin-stroking on those screens.

It reminds me of my early days as a presentation skills trainer, when I had to watch myself on video delivering our program content. Like most people, I hated seeing myself on the screen.

It’s a great tool for mastering physical skills, though. So, watch myself I did. And what jumped right out at me was—I kept brushing my nose.

Over and over and over – just gently touching the tip of my nose as if a mosquito had landed there and I was brushing it off. It looked goofy as hell on the video.

Also, I knew that body language experts consider nose-touching a sign that the person is lying. There’s a reason it’s Pinocchio’s nose that grows with every fib.

Conclusion? Well, I wasn’t lying, exactly. But I WAS faking it a little bit. Standing up there in front of seasoned professionals as if I were a presentation skills maven when I was really a refugee from radio just starting out in a whole new arena. What if they figured out I wasn’t really an expert yet? YIKES.

It took practice, but I did learn to deliver the program without all that nose-touching. Rule of thumb: if you want them to trust you, keep your hands away from your face.

And on the subject of your face …

When it comes to establishing trust, a smile can go a long way. If it’s the right kind of smile.

And that would be what’s known as a Duchenne smile, after a French physician who was studying human facial expressions in the 1800’s.

The Duchenne smile involves contracting two different muscles. The zygomatic major lifts the corners of the mouth and the orbicularis oculi raises the cheeks and produces little crinkles around the eyes.

It’s an expression of real joy. And we recognize the difference between that natural, happy expression and the fake smile that results from just moving the mouth.

That lips-only smile is the one we might put on for a camera. Or because we’re women and some jamoke just walked up to us and demanded that we smile.

An authentic smile that includes our eyes is a trust-booster in person, and maybe even more so on the screen where so much of the focus is on our face.