What IS Charisma, Anyway? 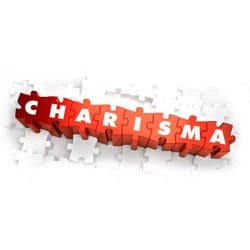 I’ve sampled opinions about charisma. Some say a person with charisma is thoroughly herself … lights up a room … has a commanding Presence … and listens so well he makes you feel like the most important person in the room.

The experts would agree. And it’s worth noting that some of them have a hard time coming up with an absolute definition too.

The word “charisma” was coined back in the 1800’s – the sociologist Max Weber called it “a gift of grace.” But is it really a gift, something you’re born with – or born without? Or can you cultivate charisma?

Psychology Professor Howard Friedman (University of California, Riverside) describes charisma as “a certain appeal, allure or presence.” He’s known for his years of research into charisma, and he says it’s reflected in some specific behaviors. Friedman tells us charismatic people:

And, importantly, charismatic people are able to make other people feel happier or sadder just by being close to them. Friedman’s experiments proved that those with a lot of charisma are “emotionally contagious” – they have an unusual capacity to ‘infect’ other people with the emotion they themselves are feeling.

Whether charisma is innate or learned is open to debate. But this much is definitely true: a person can learn to use those non-verbal cues more effectively. That’s a huge component of charisma.

If, as Friedman said, charismatic people express more emotion through their movement, gestures, facial expressions, eyes, and voice, learning to be more expressive will naturally make you more charismatic.

It’s also possible for most of us to learn to listen better. In fact, I’d say that’s the first step for someone who wants to increase their charisma.

You might want to give that a try. Make it a point to listen much more than you talk, and see what happens.

Notice how colleagues, clients and customers suddenly think you’re the most interesting person around. No kidding, people believe you’re a genius when you give them your attention.

Try it, just as an experiment, and let me know how it goes.

In the meantime, comment below to tell us about someone you know who has charisma. What IS it about them?