What You Say To Yourself Without Words 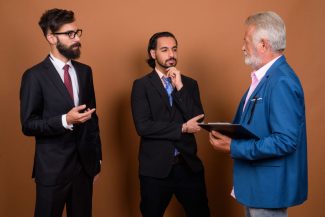 We all know that our body language influences the way people perceive us. They make up their minds in an instant whether we’re happy or sad, icy or friendly, comfortable in our own skin or self-conscious.

Silly as this may sound, it’s not just about moods. People draw conclusions about our intelligence, business acumen, or political views from the way we carry ourselves. They come to those conclusions quickly. Interestingly, the research shows those first impressions are often borne out by experience.

And there’s even more to it, as I discovered studying NLP (Neuro-Linguistic Programming).

The way we carry ourselves does influence the conclusions people draw about us. It also shapes the way we perceive them and the world around us. Hence the name Perceptual Positions.

You can use your posture to affect the way you take in information from your surroundings.

To see the situation from another point of view. And to move you in the direction of your goals.

In Self Position, a person is grounded and centered. Feet firmly on the floor, body erect, head straight up and down on the shoulders. Gestures are firm, with palms down. Boundaries are clear.

When I’m in Self Position, I see, hear and feel from my own perspective.

I’m authentic and I’m in touch with my beliefs and values. I know what I want. I can be assertive and clear about my limits.

Of course, Self Position has its limitations. It makes it easy for us to be egotistical and selfish, to be insensitive to the other person.

First Position is best for pursuing my own interests, taking care of myself, and standing my ground.

So, if you’re on the phone arguing with the cable company, plant your feet, sit up straight and keep your head straight as you explain how they got it wrong.

Don’t lean in or bend over the way people often do when they’re on the phone (as if the phone still sat on a desk, with a cord attached to it). You want to stay in your own clearly defined space – this isn’t the time to enter theirs.

In Other Position, I might be leaning toward you or maybe to one side. My head is probably tilted. My body seems softer, less rigid. I gesture softly toward you, with my palms up.

When I’m in Other Position I can see, hear and feel from your perspective.

Now I can be empathetic and understanding. I’m getting in touch with your beliefs and values; I sense what you want. And I may even begin to predict what you’ll do.

Limitations: In Other Position, I could be servile and acquiescent, a doormat.

You can use Second Position for understanding another person, creating rapport, realizing the impact your actions have on someone else.

When your best friend needs to talk, you can listen better and empathize more in Other Position. Lean in, soften your body and tilt your head. It will give you a much better chance of fully appreciating their situation.

In Observer Position, I’m leaning back away from the action. My arms might be folded across my chest; you can sense that I’m pulling away.

In Observer Position I can see, hear and feel from an outsider’s perspective.

An observer can be neutral and detached; separate from somebody else’s stress or intensity. Observer Position is good for getting in touch with data and patterns. A person can step back, literally have a wider view, and be analytical and logical.

The downside? The person in Observer Position could be cold and calculating or distant.

Third Position is best for taking stock of the situation, shifting gears, discovering a new alternative or relieving strong emotion.

Let’s say a colleague is venting and you know for certain their issue has nothing to do with you. You don’t want to get mixed up in it; you know nothing good can come of this diatribe. Lean back – away from the fray. You might fold your arms in front of you for good measure. You’re blocking the negative energy so you can assess what’s happening and do what’s right for you without taking on their agida.

If you start paying attention, you’ll notice that people (including you!) move in and out of these Perceptual Positions all day long, mostly without conscious awareness.

You’ll find you can use your posture more strategically as you interact with people, even when you’re talking on the phone or a virtual platform.

We each tend to have a default position that feels like home. You might not be surprised that mine is Self Position. I can slip into Other when I’m talking with someone I care about. That Observer posture? It doesn’t feel natural to me at all. (Apparently, I’m more likely to be in the fray than out of it.)

There could be a gender thing at work in Perceptual Positions. In my first NLP class, the people who felt most natural or comfortable in Other Position were overwhelmingly women. And those who defaulted to Observer were mostly men.

It’s classic, right? She wants to engage; he wants to pull back. What would happen if they intentionally adopt the other person’s position? If he tries out Other and she goes for the Observer stance?

In class, we did an intriguing experiment with “walking in their shoes.” We literally followed behind someone who was not like us, intentionally mirroring their posture and movements, trying to get a sense for who and how they are.

I’d love to hear which Perceptual Position feels like home to you. And what happens when you start using these positions more intentionally?