Hey, What’s Happening To Your Glabella? 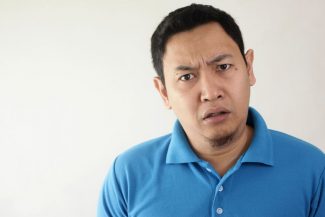 If you’re like most Americans, you didn’t pay much attention to the political conventions. I, on the other hand, watched just about every minute of both of them. Yes, there were moments when I wanted to throw something at the TV.

And, it was such a great opportunity to study speakers, I couldn’t pass it up even when I found myself annoyed. Or bored. Or enraged.

Yes, I was interested in what the politicians, special guests and “ordinary Americans” had to say. I was even more intrigued by the way they said it. The smile or the smirk. The gestures or their absence. The tilt of the head and the tone of voice. All of it spoke volumes.

I wasn’t alone. Former FBI agent Joe Navarro was studying their style too; he wrote about the politicians’ performance for Politico. It’s worth reading Navarro’s take on the main players.

Here’s what jumped out at me, and why I think this is important for you. It’s not because of any candidate for anything.

It’s because of your glabella.

Your eyes are the window to your soul. Your smile is your umbrella. Your glabella, it turns out, is a signal to the world how serious or scared or angry you might be at the moment.

The glabella is the smooth part of your forehead right between and above your eyebrows. Of course, the older we are, the less smooth it is.

Glabellar lines are those horizontal furrows across the forehead. Then there are the vertical folds between the eyebrows, commonly called “the Eleven.”

And how important is that part of a person’s face? Navarro, in the context of analyzing Joe Biden’s expression during his convention speech, says we’ve been paying attention to glabellas forever.

“We are trained to look at the glabella even as babies. You can do this as an experiment to see it in action: If you furrow your glabella and squint your eyes at a baby, they’ll react negatively, probably with crying. From a very young age, we’re primed to look at this section of the face to gauge whether everything is okay, and when we see this particular look, we recognize it as a ‘serious face.’”

“Serious” is one way to put it. Elsewhere, glabellar lines are described as showing anger, fear, surprise and general crankiness.

No wonder so many women—and a lot of men too—want their glabellar lines gone. They’re associated with aging and bad moods.

You might remember I was one of those women. What’s not to like, I thought, about looking a little younger, a little fresher, a little happier? Sadly, my flirtation with Botox didn’t end well.

Most people have a much better experience grappling with their glabella. Or at least they don’t wind up with the dreaded droop that plagued me. (I thought I’d never get my face back!)

However, most people do wind up without one powerful communication tool. That’s what I want you to think about for yourself.

Now I know there’s a tremendous amount of pressure on women in public life, and not only about the positions they take and the way they express their views.

No matter how much experience and wisdom they’ve accumulated, they’re also expected to look young and glamorous. And they’re penalized if they don’t. (No need here to go into the litany of insults from the president.)

You can hardly blame those women for getting a little work done. And maybe a little more after that. Until they wind up almost expressionless, especially around the eyes.

It’s not just the politicians, by any means – you see the same thing among the analysts and panelists on TV. Even young women whose natural faces seem nearly flawless to me will suddenly, one day, show up on the screen with their expression erased. Some of them are starting to look like plastic dolls instead of flesh-and-blood human beings.

Think about your own face. Better yet, take a look in the mirror. Watch yourself as thoughts and feelings float by. What changes do you see?

Facial expression is such a powerful part of presenting ourselves to the world; it influences the way people hear our words, how they respond to us, how much influence we have.

Yes, I suppose we can compensate. We can use more dramatic gestures to make up for immobility above the neck.

We can certainly add variety to our voice to have more impact … after all, I’m the one who talks about powerful presenting on virtual platforms where people may not see your face, whether it moves or not.

Still, that expression in the forehead and around the eyes plays such an enormous role in communication, I think all of us, men and women both, should be very careful about giving it up.

Maybe you’ve already said goodbye to glabellar lines. Or maybe you’re sticking with the face you’ve got. I’m eager to hear how you feel.